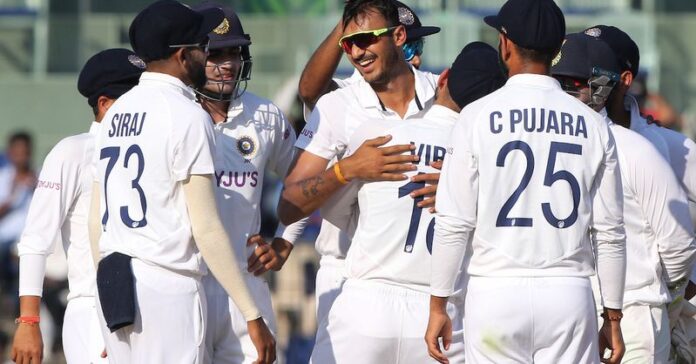 Axar Patel, who’s making his Test debut at the Chepauk, reckons that it’s a turning pitch but you have to nail the right areas to get the most out of it. He also added that the team’s confidence was greatly boosted by the partnership between Virat Kohli and Ravichandran Ashwin.

The venue of the first and second Test might be the same but not the nature of the deck as the pitch has been turning in the ongoing Test as opposed to the series opener, played on a relatively flat wicket. Despite the assistance from the wicket, there has been a lot of difference between the way both the team’s spinners have bowled.

While Indian spinners have able to gain maximum out of a helpful track, the same hasn’t been the case with England duo of Moeen Ali and Jack Leach. Especially, Moeen has bowled quite a few full tosses pretty much like Dom Bess and at times both have lacked the penetration as shown by the Indian spinners. Axar Patel, who took two wickets today for India, also suggested the same and stated that one has to bowl in the right areas to reap rewards.

“Like the way the wicket is behaving, it’s turning. But it only turns when you bowl the right length, the right pace. If you are a little slow, it doesn’t turn a lot. So if you hit the right pace and line, it becomes tough for them to bat. It becomes important for the bowlers to bowl the right pace,” Axar told reporters in a virtual presser at the end of day three.

There have been a lot of talks around the nature of the wicket but the left-arm spinner asserted that players need to adapt just like Indians do on seaming wickets.

“Actually if you look at my last dismissal (Root) one, it was down to the umpire, so I can’t say a lot on that. But here on this wicket, I think we played really well, so when we are able to score runs, they shouldn’t have issues. I think they (England) should change the mindset about the wicket because we also play on seaming wickets.”

Notably, if not for injury, the Gujarat spinner would have played the first Test too, and he reckons it was frustrating for him to miss out earlier. Once the No.1 ODI bowler in the world, he also said that the wicket has suited his strength as he tries to bowl accurately.

“I was about to play in the first Test, it was frustrating for me but I never got irritated by it. I just took some time and worked on my fitness, my physio told me that it was a niggle and it would become alright for the second Test. It was frustrating but if you look at it positively, I could give my 100% here. I have played with Ash a lot, his mindset and his bowling to both left and right-handed batsman. He talks a lot about mindset and how I could trouble the batsman with my bowling.”

“The way I bowl, accuracy is my strength, it has worked well for me. It’s just that you have to be accurate, focused and keep bowling the same line and length. The wicket will take care of itself, you just have to keep bowling to your strength,” Axar said.

Indian batting got off to shaky start and were at one position, 106 for 6 today but then Kohli and Ashwin combined in a big partnership with the former getting a fifty and the latter making an emphatic century that helped India to 286 runs. Axar remarked that the team’s confidence was boosted by the Kohli-Ash partnership and also how the team doesn’t pay much attention to the outside noise.

“I think our team’s confidence was boosted by Ashwin’s knock. We had a lot of soft dismissals, the way Pujara got out. We were a bit nervous but the way Ashwin and Virat played, we had immense confidence and when there are runs on board, you tend to be more confident of your chances.”