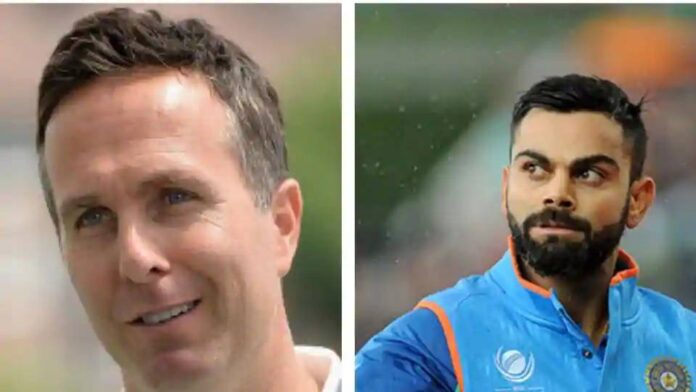 Michael Vaughan has reckoned that he isn’t overly concerned about Virat Kohli’s form, with the Indian captain’s last century coming in 2019, against Bangladesh. The former English skipper also predicted that Kohli might get two centuries during the four-match Test series against England.

Since November 2019, Virat Kohli has endured a tough patch, with no triple-figure scores in the longest format. In the recent past, his long format form has rubbed onto the limited-overs one, where likewise he has gone without a big score. In the first innings of the ongoing Test, the right-hander was beaten by Dominic Bess, who got the ball to turn past his inside edge for a sharp catch to the close-in fielder.

However, despite having gone seven Test innings without a century, former England skipper Michael Vaughan reckoned that he isn’t too concerned about the right-hander’s form. In fact, his confidence in Kohli is imminent, with him predicting that the Indian skipper will get two centuries in this series.

“I won’t be too concerned and I’m sure he isn’t concerned. Throughout the series, he will get 1-2 hundreds. I have no question about that,” Vaughan said in a video on Cricbuzz, reported HT.

While he wasn’t concerned about Kohli’s form, he was worried about the way he brought down his own dismissal, with a timid approach against the off-spinner. He went on to add that facing an off-spinner, it is a prime objective for a right-hander to not play with an angled bat as the ball might pop off to short-leg.

“The manner of his dismissal today was weak for Virat Kohli. He defended the ball outside the off-stump with an angled bat facing towards wide extra cover. There is nothing in that shot. As a young kid playing the game, you don’t defend an off-spinner outside off stump because you want to be keeping the face of bat towards the ball. You play with an angled bat, and if there’s bounce, it goes to short leg. So technically, it wasn’t a great dismissal for Virat Kohli,” Vaughan added.

On top of that, Vaughan also opined that it would have been better for Kohli to go all guns blazing against the young spinner.

“I thought he was just trying to play today. I know that sounds simple. I think Virat’s a better player when he comes out trying to be aggressive. When his feet are moving and he’s looking to dance down to the spinners to put them under pressure,” he added.