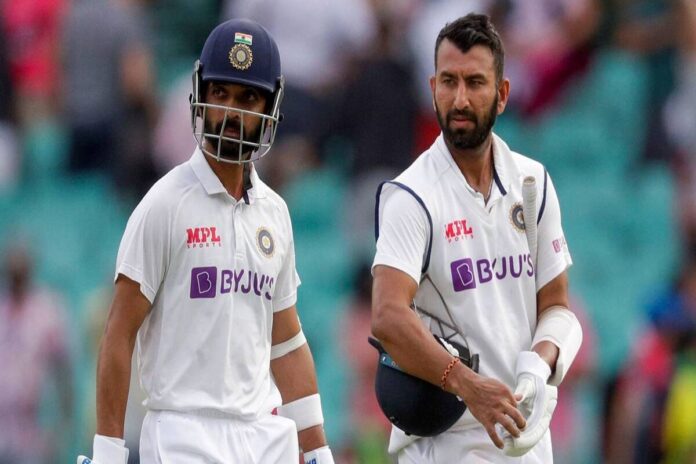 One of India’s batting mainstays Cheteshwar Pujara has stated that he loves batting with the attacking keeper batsman Rishabh Pant and is quite happy with the way he has been batting. He also added that Pant needs to learn from his mistakes and understand to put team first at times.

Rishabh Pant and Cheteshwar Pujara forged together a brilliant partnership of 119 runs for the fifth-wicket on day three of the opening Test in Chennai to help India to 257 for 6 in response to England’s massive first innings total of 578 runs. Pant and Pujara have done quite well as a pair and it was third consecutive Test when they stitched together a crucial stand for India in times of distress.

Speaking in the presser after the culmination of day three, Pujara asserted that the left-right combination of the two goes a long way in unsettling bowlers and also how well they understand each other’s game. He also declared that he loves batting with the 23-year-old.

“It does (make it difficult for the bowlers), we always have a chat, there is a good left-right combination which frustrates the bowlers. I think when the scoreboard is moving at a brisk pace, we have batted enough now to understand each other’s style. We know that Pant attacks the spinners and that’s the way he goes about it. I love batting with him and I’m really happy with the way he is batting. He still has to put the team under a commanding position but he is learning that,” Pujara said in the virtual presser.

Pant had got out on 91 today in a bid to play an aerial inside-out shot of off-spinner Dom Bess with fielders in the deep, which was a huge blow for India. The 32-year-old also called for better understanding from Pant at times in Tests, which he feels he has done in the past and can do even better if he learns from his mistakes.

“Well, communication with Pant is to make him understand the shots that he can play and avoid. I can’t be specific about the shots but there is clear communication with him that he has to look out for the shots. Sometimes, even he has to understand that he needs to put the team first, he has done that many times in the past. He will learn from his mistakes and there are times when he can be a little patient and put on a partnership. He can put the team first and also put a total on the board. I’m sure he will realize that.”

However, he also emphasized that for an aggressive players like Pant, he won’t be able to succeed if he gets too defensive and has to play his natural game with proper balance.

“No no actually, it is his natural game, if you make him too defensive, there are chances that he will get out. He needs to understand which shots are required and which aren’t. He needs to understand that the team requires him to bat long at times. But one thing, whenever, he is batting at the crease, the scoreboard keeps ticking. Balancing aggression and defence is something that he needs to understand. For me, there is no pressure at all. I keep playing my shots, I don’t take any pressure but rather it makes it easy for me to bat.”

After a great partnership between Pujara and Pant, local lads Washington Sundar and R Ashwin have put together an unbeaten 32 off 104 deliveries for the seventh-wicket with Sundar in the middle on 33*. Pujara feels India are still in decent position with both players in the middle.

“It is very difficult to compare bowlers (Ashwin and Bess). Ashwin has done exceptionally well for us, not just in India but also overseas. Dom Bess did pretty well, being it his first tour in India. As a batting unit, we just want to achieve the right things. Before the series, we spoke about our goals in Australia and the outcome. Whatever goals we set, we achieved there in Australia and the same thing applies here. We are still in a decent position, the way Ashwin and Washi are batting, we just want to achieve our goals as a batting unit.”