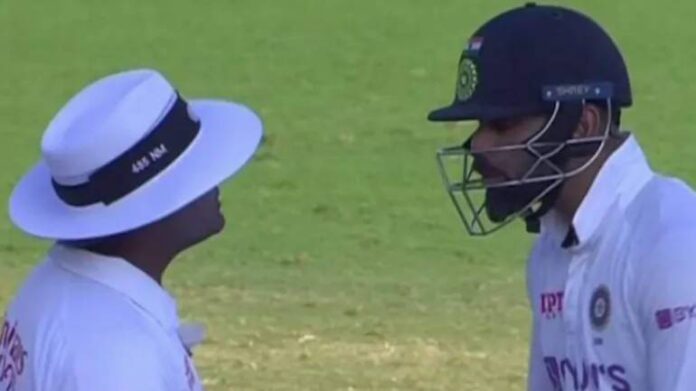 After a close umpiring decision that went the other way, Virat Kohli was seen arguing with the umpire, which made David Llyod opine that Kohli should be dealt with disciplinary actions. He also added that if it was any other sport, the player would have been banned for the next encounter.

While the second Test was made highly controversial, owing to the conditions of play, with the pitch starkly different from the conditions in the first Test, there were umpiring decisions, which also caused immediate reactions. While Joe Root suffered the wrath, when Rohit Sharma was given not-out, Kohli faced a similar situation in the second innings, when the Nitin Menon’s decision saved Joe Root.

That left the Indian skipper fuming, who in turn stormed to the umpire, expressing his displeasure, which didn’t seem pleasing to the eye. Eventually, Kohli had walked out of the scene, as the umpire’s decision stood final, which has prompted David Lloyd’s opinion. The English commentator stated that Kohli shouldn’t be playing the third Test and instead should be banned with disciplinary actions.

He also didn’t mince words, stating that the decision to not punish the Indian skipper made him chuckle and despair. Lloyd also compared it to other sports, where often the player would be sent-off, for arguing with a referee.

“No word of any disciplinary action against Virat Kohli then? I chuckle and I despair. Cricket is so archaic. The captain of a national team is allowed to criticise, berate, intimidate and ridicule an official on the pitch. And he was allowed to carry on playing on in the second Test! In any other sport, he would have been sent off the field. Kohli certainly shouldn’t be playing in Ahmedabad next week,” Lloyd wrote in his column in the Daily Mail, reported HT.

The Englishman also stated that in footballing terms, it would be a straight ‘red’ which would mean that Kohli would miss the next three Tests for India, including the World Test Championship final if they qualify. However, he berated that now Kohli is allowed to play the next Test, which is baffling.

“All it would take to show the public the severity of any offence is the introduction of yellow and red cards. This was a straight red — which would mean he misses the next three Tests. The lack of any action from match referee Javagal Srinath sitting there in his nice air-conditioned room beggars belief. Three and a half days and he has said nothing,” he wrote.