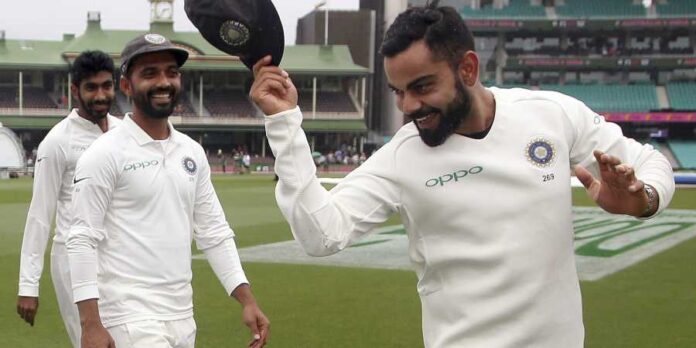 Virat Kohli has asserted that once he realizes his mistakes, he doesn’t do any let up in correcting those errors and that trait is something he takes a lot of pride on. The Indian skipper has further stated that Rishabh Pant worked really hard on his keeping and that is reaping dividends now.

Virat Kohli’s incredible consistency in all the formats of the game is a story for the ages, however, the same can’t be said about his performances since he hit a century against Bangladesh in 2019. Even though he looked out of depth multiple times since that series, with no centuries to show against his name, the fact that he played three fine half-centuries in three Tests – Adelaide and the two Tests in Chennai – speaks volumes about his ability.

Kohli admitted that he takes a lot of pride in doing stuff his way and improve in every game once he understands his mistakes. It was clearly on show in his 72 in the first Test and the valiant 62 in the second.

“I take a lot of pride in improving myself and correcting my mistakes quickly. If I make an error, I make sure I iron it out in the next innings. Ashwin batted outstandingly well and that partnership between us was very crucial. I knew I could trust my defence and easily bat four sessions on this pitch. Ahmedabad is going to be challenging. This England side has quality players and we need to be on our ‘A’ game throughout,” Kohli said in the post-match presentation.

Rishabh Pant was the most improved cricketer and turned out to be the most-valued Test player for India ever since his comeback in the MCG Test. Even though Wriddhiman Saha was the specialist wicket-keeper for the home conditions previously, Pant has comfortably replaced him now and Kohli can’t be happier.

“Rishabh Pant has really worked hard in Australia, when he moves with the gloves you can see the difference in his reactions. He has shed a lot of weight and has worked hard on himself. It is showing, the way he kept with so much turn and bounce, credit to him. We want him to keep improving as a keeper because we know the value he brings to the team.”

Meanwhile, Axar Patel had an incredible Test debut, joining an elite bunch of players to pick up a five-wicket haul on his debut. For a player who was playing international cricket for close to seven years now, it was a moment to treasure for him and Kohli shared his pleasure for the Gujarat all-rounder.

“It is a very, very special moment for Axar. He would’ve played the first game as well if he didn’t have that niggle. He was keen to step on, and if you get that kind of pitch, he was all smiles and couldn’t wait to get the ball in his hands. Hope he builds on from here, he has an important couple of games ahead,” Kohli concluded.