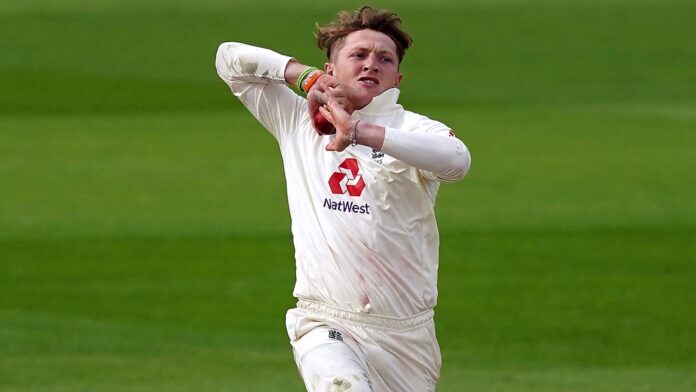 England off-spinner Dom Bess, who ran through the Indian line-up on Sunday, admitted that his side are now in a commanding position in the game but insisted that it is imperative for the team to not think too far ahead. Bess further hailed Pant, who according to him played a phenomenal innings.

When England strode out to bat on Day 3, they were accused by many of ‘playing for a draw’, but the Three Lions’ astounding bowling performance on Day 3 turned the narrative of the first Test around. After accumulating a mammoth 578, England, at stumps on Day 3, reduced India to 257/6, putting themselves in prime position to win the contest.

The job for England, however, is only half-done and this was acknowledged by Dom Bess, who was the destructor-in-chief on Sunday. Bess, who picked four wickets and punched a hole in India’s batting, admitted that his side are in a strong position, but stated that it is important for them to not think too far ahead.

“I do not want to get too far ahead and say anything. Most important thing is finishing off this first innings and see where they are at, at that point in time. They got these two, who can certainly bat. But we have put ourselves in a very good position,” Bess said in a virtual press conference on Sunday.

Despite coming on the back of a successful tour of Sri Lanka, there were doubts over Bess’ quality as a spinner, but the youngster put to bed all questions through an exceptional showing on Day 3. Bess’ sizzling performance included the prized scalp of Virat Kohli, and the 23-year-old revealed that the Indian skipper’s wicket ‘happened by chance’.

“I was just trying to bowl at a spot, trying to build pressure for a long time, and II guess it just happened. It wasn’t like I was trying to bowl that magic ball. It was really just about hitting that box. I saw the replay and it seemed to [drift] a little more and got him playing at a wider line, and I’m glad Popey took a great catch at short leg,” Bess said of Kohli’s wicket.

England and Bess managed to keep almost every Indian batsman in check, but Rishabh Pant. On the back of historic knocks at both the SCG and Gabba, Pant played yet another mind-bogglingly good inning, striking 9 fours and 5 sixes before falling nine short of a well-deserved century. Bess described Pant’s innings as ‘phenomenal’.

“Pant is just a completely different player and he played phenomenal innings. I think how he played was really courageous.”

In particular, Pant took a liking to left-arm spinner Jack Leach, who was deposited to the stands five times by the southpaw. Pant’s merciless assault meant that Leach finished with figures of 0/94 at the end of Day 3. Bess insisted that the left-armer bowled exceptionally well and added that he was unfortunate to have got caught in the Pant-storm.

“I thought Leachy bowled really well today. You saw the spot map, and from him to Sundar, I guess he had 20 balls on the same spot, but I guess it was just a different innings [from Pant].”