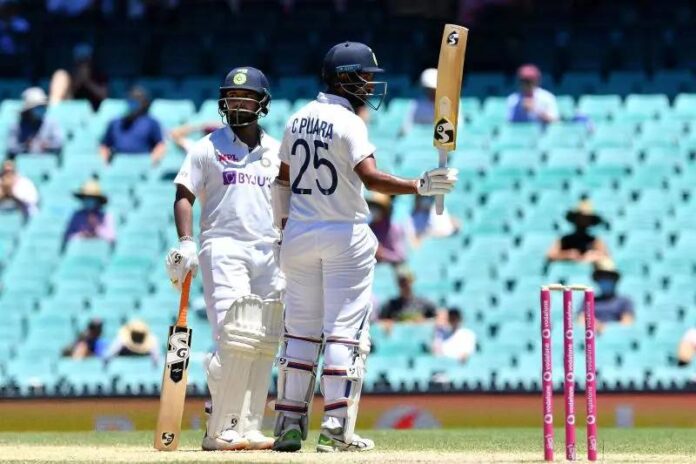 India’s Test no.3 Cheteshwar Pujara has an injury scare as he was hit on his hand yesterday whilst batting and as a result, he will not be fielding today. Pujara is having a torrid time in Test cricket of late in terms of getting hit on his body and that was the case yesterday as well.

Cheteshwar Pujara has been at the receiving end of some painful blows right since the Gabba Test. There were many deliveries that hit Pujara when the Australians targeted him with a barrage of short deliveries. In India’s first innings in the ongoing Test, the right-hander was hit on his glove and was in a lot of pain after he failed to get on top of the bounce against Olly Stone on the third delivery of the sixth over.

The ball was delivered at an uncomfortable height for Pujara and he had to even call for the physio as he needed assistance. And today, according to a BCCI update, he won’t be able to field as a result of the blow to his right hand. Pujara had made 21 off 58 before he got out to Jack Leach and will be crucial for India in their second innings and also the remainder of the series.

“Cheteshwar Pujara was hit on his right hand while batting on Day 1 of the second @Paytm Test against England at Chepauk. He felt some pain later. He will not be fielding today,” read BCCI’s tweet.

India made a total of 329 runs in their first innings with Rohit Sharma making 161 while the likes of Ajinkya Rahane and Rishabh Pant also made fifties each. At the time of writing this, England were batting at 38 for 3 with Rory Burns, Dom Sibley and Joe Root back in the pavilion.