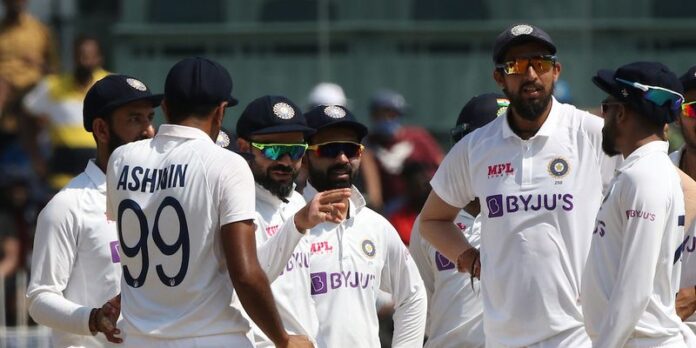 On a day that was about to get tough for England, Dan Lawrence didn’t do himself any help with his ‘harakiri’ to send Ravichandran Ashwin out of the ground. After that, it was just a case of formality for the rest of the day, as the Indian spinners wrapped the English batsmen by their spell.

Dan Lawrence’s harakiri could cost him

After what was considered a brilliant first tour in Sri Lanka for the young right-hander Daniel Lawrence, his task was cut out against the top-notch Indian bowling attack. His uncanny batting ability, combined with his footwork had the entire world talking, after his first knock at Galle, where he scored a scintillating 73. He then took the attack on once again, with an unbeaten 21 in the second innings. However, from thereon, he has succumbed under pressure, multiple times, all of which could be put down to his inexperience. In the first Test, he was undone twice by the seaming delivery – from Bumrah and Ishant Sharma.

However, in the second Test, there was a different tale – one where his inexperience had taken precedence over his skills. After battling it out in the heat, against the spin duo of Ravichandran Ashwin and Axar Patel, the right-handed jumped at delivery before poking it tamely to the short-leg fielder just before lunch bells came calling. While his dismissal might have been put down to extra bounce, his inexperience came into the picture, with his ability to not see through the tough session. Combine that with his second innings dismissal, where his dismissal was more because of him than the bowler.

Lawrence, in a brain-fade moment, jumped down the pitch, aiming to take down Ashwin ended up getting himself humiliated and stumped by a brilliant piece of keeping from Rishabh Pant. Talent might only last as long as Lawrence converts and now with Bairstow and Crawley returning, who knows what might happen?

Virat Kohli has been proactive, more than you would expect and more than you would think. Right from the first over of the day, where he handed the ball to Mohammed Siraj, Kohli has rotated and kept his bowlers fresh throughout the first session of the day. Be it Siraj bowling or Axar Patel accompanying him from the other end, Kohli was spot on with his tactics. The way he went about things, changing his bowlers, bringing them on from the end which would allow for them to flourish, Kohli had been immaculate on the fourth day. When Ben Stokes was looking more and more confident against the set of bowlers, he introduced Ravichandran Ashwin into the attack and set an ultra-attacking field, to see the downfall of the southpaw.

As much as five fielders were within touching distance from the batsman, with constant chirping from the slip-cordon, who were assured that Ashwin would get his man yet again. He did, that was not just to Ashwin and his amazing 101 variations with the ball but also the constant decision-making from the Indian skipper. What was more effective was how he brought on Ishant Sharma just after that, knowing there were two right-handed batsmen at the crease. With Ishant’s ability to get the ball tail in back to the right-hander, his over against Pope and Root was a testament to his proactiveness, with three fielders on the leg-side, guarding the uppish drive, which was one of the percentage shot for the batsmen with the ball tailing. Later on, his change to bring Axar Patel back into the attack accounted for Ollie Pope. Incidentally, with this win, he also tied MS Dhoni’s record at the top of the proceedings, with wins at home.

When Axar Patel was unavailable for the first Test, with an injury, India had to change their entire game plan around – with the selection of Shahbaz Nadeem and Washington Sundar, to fill the gap left by the all-rounder. However, his return saw an aggressive India take the field, with Kuldeep coming back into the setup, with the left-arm all-rounder. He was at his best, with his ball often putting the English batsmen in a mind-block. They couldn’t quite fathom what he was doing, whether he was spinning the ball away from them or bringing it back in or just keeping it straight. If India have always marvelled at Ravindra Jadeja for his ability to puzzle the batsmen and entertain the fans, Axar Patel was living up to the expectations, that doesn’t mean he should be compared to Jadeja.

His effectiveness in the second innings, well reflected by his statistics on the domestic scene – an average of 23.6. Earlier on the second day of the Test as well, Axar drew a 26% false shot from the English batsmen. In all, the way he is operating, India wouldn’t fret over their decision to have him in the Test setup, with his bowling performance, where he picked up a fifer. But invariably, his biggest Test – the litmus one – is around the corner, in conditions where there isn’t as much turn for the spinners. Come to the Ahmedabad Test, it would be one of Axar’s toughest tests but would he come out of it rather successfully? And the fact that he hasn’t yet stepped up with the bat, would come haunting for him on pitches that don’t favour spin-bowlers.