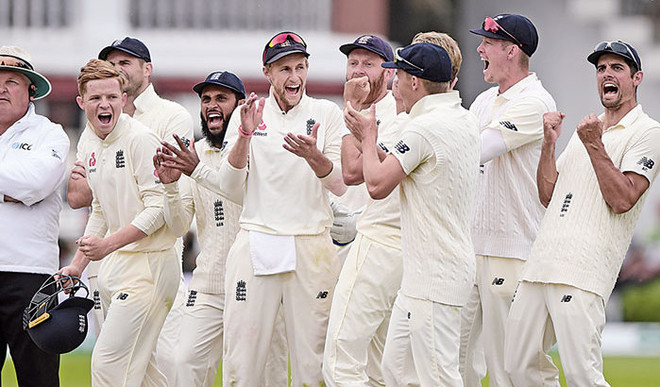 Three back-to-back days and it has been an England domination all the way in the ongoing Chepauk Test, much on the unexpected lines. Today, Indian batting disappointed largely as they batted with little or no application barring Pant-Pujara as England ended on top with Jofra on fire from the start.

Raw pace, height, bounce, skills, intelligence – Jofra Archer wasn’t designed in any laboratory though he may seem like one with what he offers. Right in his fifth delivery in Asia, a 141kph delivery hits good length and raises a puff of dust from the surface and the ball races past the outside edge of Gill like a quick leg cutter. Jofra hits it where it matters. It’s enough to create doubts as after fielding 190 odd overs, Indian openers must have realized it ain’t as flat especially when Archer has the red-cherry.

It is a third-day pitch but then why James Anderson wasn’t as threatening? This is about what Archer brings to the plate – pace and bounce. The right-arm pacer gets the reward soon, Rohit who averages 88.33 and is invincible at home gets out early as all it takes is nine deliveries for the lanky pacer to get off the mark in India. He does it with a short of length nipping away delivery after steaming in at pace. Soon enough the dangerous-looking Gill is also dismissed as Archer takes two wickets in his first spell.

Then walks in India’s Test kingpin – Virat Kohli. And the one ball that pretty much typified the threat that Archer brings on these surfaces came on the third ball of the 20th over. He beats Kohli’s outside edge. It could have been a half-volley had he taken a stride forward points a TV commentator. But why he didn’t? Because Jofra has threatened Kohli’s head and gloves with vicious bouncers and has created enough doubts in his head not to lunge forward easily as he does to Anderson. Archer has already brought many modes of dismissals to play on a flat pitch. This is the X-factor that he brings, which they otherwise wouldn’t have managed.

Lack of application from Indian batsmen

Undoubtedly, this is a third day Chennai pitch. It’s doing more than the last two days but anything worth being 73 for 4 when England made 578? Not quite. Especially the way the Indian openers got out it was as if they were expecting things to fall in place for them just because it’s a flat pitch and should be easy to motor along. Rohit Sharma, who was guilty of throwing away his starts be it taking on the bouncer in closing phases of the SCG Test or his Gabba attempt to hit a maximum off Lyon, was at it again.

Archer did bowl a good delivery to Rohit but the senior batsman was hanging his bat out even when the ball wasn’t heading to the stumps and pushed at the ball. Openers are supposed to be tested on the off-stump line with the new ball no matter where you play and Rohit just didn’t show enough discipline to counter early overs. His junior partner Gill also followed in his footsteps too. He was creaming the ball with the ease of a master batsman at his peak. Nothing seemed to faze him and a big knock beckoned. But he played an uppish on-drive too early to a freebie full ball as if its white-ball cricket or he’s in some rush.

Virat Kohli got out playing away from his body which is risky when the ball has turn and bounce, quite opposite to what he does, let the ball come to him. And the Ajinkya Rahane dismissal just summed India’s expectation of carrying over from Australia without breaking a sweat. It was one heck of a catch but Rahane also got into a position that he played an aerial shot at a time when India needed stability. Just poor application. Period, which put the responsibility back on Pujara-Pant partnership.

‘Ice’ Pujara and ‘Fire’ Pant and the art of fightback

Cheteshwar Pujara and Rishabh Pant, these two are the personnel of a contrasting world. One will kill by squeezing every ounce that there is in a bowler while the other will keep hammering till you tap into submission. But this pair combines well. Never have I felt opposites attract as much the last three Tests that India have played with this pair as they have strung together stands of 53, 148, 61, and 119. This is how well these two have done together for the side.

One thing common between all these partnerships and these two has been the resolve to fight back for the team when the chips are down. Today again, like the SCG and Gabba Tests, they came with the team needing a solid performance from them. At 73 for 4, with all batsmen getting out sans application and a big deficit, they got into their element. It was Pant again, who started putting back the pressure on England as he attacked Jack Leach, taking him to the cleaners and kept attacking, showcasing audacity that made him a hero at Gabba as he replicated the confidence from Down Under.

On the other hand, Pujara also looked at ease. He played the spinners in his trademark fashion of coming down the track to not let it spin much. He was solid against fast bowlers. And if not for an unlucky dismissal, he was set for a big knock. The partnership between the two might well have ended on 119 but they again showed how two extremes can succeed together yet again and have developed into a dependable combination. Moreover, it helped India get out of extreme trouble after they have been on the back foot since day one, even if it was only for a short duration.