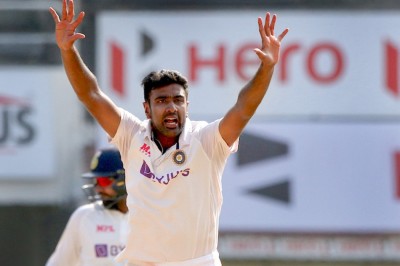 After breaking Harbhajan Singh’s record of 265 home wickets, Ravichandran Ashwin has stated that people used to make fun of him that he used to bowl like him, and now breaking his record is incredibly special. Ashwin further asserted that picking a fifer in front of the Chennai crowd is special.

India had a terrific day in the office, bunding England out for a lowly total of 134 runs to take a 195-run lead in the first innings. Ravichandran Ashwin was the wrecker in chief, picking another fifer to continue his love affair with Chepauk, where he has had a fifer in every Test he has played there barring one against England in 2016.

In the process, he also got closer to 400 Test wickets and broke Harbhajan’s record of 265 home Test wickets as well. On being asked about the same, Ashwin stated that he never thought of becoming an off-spinner in the first place and now reaching this position is incredibly special.

“When I started watching Harbhajan Singh in the 2000s I was still wanting to be a batsman, never expected to be an off-spinner. I wasn’t even sure if I was going to play for the Indian team. A lot of my teammates used to make fun of me, I used to bowl like Bhajju pa. From thereon, to come and break his record, it is incredibly special and extremely sorry, Bhajju pa,” Ashwin said in the post-match press conference.

Ashwin was further delighted by the fact that crowds made their presence felt in the game and it allowed Ashwin to soak in the energy from the ground he grew up playing in.

“It’s wonderful to have crowd back in the first place. The Indian cricketing fans are also waiting to come and watch live sports. On the other hand, it is always special for me to play in front of my home ground and picking up a fifer. I would always cherish and in front of the Chennai crowd, even more special.”

With so much talk about the nature of the pitch and the right kind of approach to negate the impact of the spinners, Ashwin stated that it depends on individual to individual. Giving an example of Rohit Sharma, Cheteshwar Pujara and Joe Root, Ashwin stated that one needs to find scoring areas for themselves.

“Look whatever works for you, Rohit has been sweeping really well, he has used his feet as well. Puji has used his feet really well. On the other hand, someone like Root likes sweeping. In the end, you just go with whatever works for you. Even for the quicks, you have to take the percentage shots. I think it’s about identifying the right kind of intent. Sometimes when you play on this kind of pitches, you are set for the game. You have to find scoring areas for yourself.”