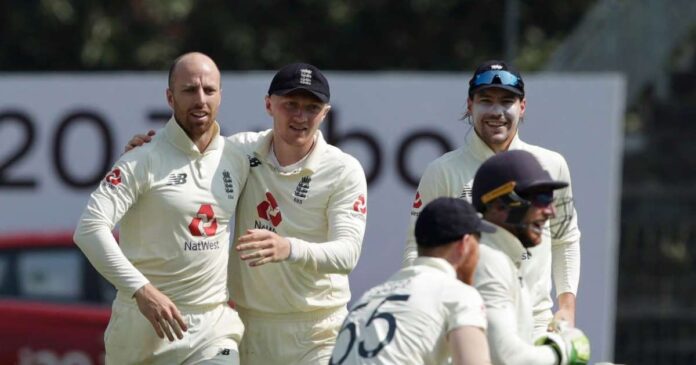 Ahead of the series, the focus was of course on Root, on the English batting if they can withstand the Indian bowling unit. But as the past has suggested, always look out for the foreign spinner, especially if he’s left-handed and if it’s a series opener.

Rishabh Pant steps out of his crease, Leach has found the ideal spot for the southpaw, who crashes the ball against the sponsors beyond the boundary rope. The riveting battle between two cricketers – at either end of 20s and a new stage of their career – handed contrasting opportunities. While Pant made the fullest use at the striker’s end, Leach made the headline for all the wrong reasons.

Never has a spinner been banished as quickly as the left-armer has found himself and never has the Indian wicketkeeper shown mercy to a spinner. For one-tenth of a second, Leach had a different game plan but when the second it was completed, he found himself in a similar position – the Rishabh Pant effect, float like a butterfly, sting like a bee.

Having craned his head for the major part of the day, Leach identified the struggles of bowling in India and quickly identified what the other spinners have gone through in the past against the youngster at the other end. Root and Leach were right – they had a definite plan for the youngster in place. But as it happened, it went awry and he ended up conceding 69 runs off his first seven overs in the country. There has never been a sweeter welcome in the country.

“Having missed so much cricket you have to remember to cherish and enjoy these moments. It’s my first time in India and to come here and bowl spin is the dream I had. So I just see it as a fantastic opportunity and one I want to enjoy,” Leach had said before the tour.

While he took the needed risk, he failed. Yet he moved on, learnt from it and stepped up his game, indicating the presence of the tough mentality. But later on, in the scheme of things, the left-armer bowled snarlers and gems when the ball seemingly gripped. And when he struck, the ball dropped, while in reality, it bounced off the upper part of Ravichandran Ashwin’s blade. It was a dangerous partnership but not more dangerous than what the 29-year-old had just unearthed – the sweet spot of success in Chennai.

In the span of two, he accounted for his second wicket – another victim of the vicious bounce. Having put under the pump for the most part of the third day, Leach had just found another incarnation of himself – reinventing his bowling – in the middle of the day. When England had a lead, aplenty that some deemed – there was the other task impending for the left-arm spinner. He had to open the bowling this time around.

In the wee hours of the day, where you would have your premier bowlers in tandem, Root found an opportunity to rattle in Leach – a spinner – a ploy that was previously employed in Sri Lanka as well. But up against the English spinners were two of India’s best players of spin – Rohit and Gill. Two of whom, who have disregarded plenty of spinners during their cricketing career and interestingly banished several spinners in the process as well. With runs leaking, as if it were some faulty plumbing, England were flooded with problems – none really solving it at the same time.

Having struggled against Gill in just the previous over, Leach was handed a reprieve when Rohit crossed ends. Flighted ball, enticing the batsman to get on the up and knock it straight back, the Somerset spinner threw a dime. It turned out, it wasn’t a dime but a diamond, as Rohit headed back to the dressing room. A pitch that made life hell for the left-arm spinner had overnight turned into his saviour, into his mentor and, moreover, handed him an opportunity to start afresh. England still needed nine wickets, they still had Cheteshwar Pujara – the man possessed by the batting gods at the crease.

When spinners around the world have been bothered by his looks, his demeanour – Leach stood there, striking a chord with his inner mind and seemingly found the right word with the pitch. Pujara was pushed, pushed on the backfoot and then brought back forward with a flighted delivery that landed England the sucker blow against India. Flight, bounce, outside edge, slip cordon – four magical words suddenly brought about a new life in England, at a time where waking up was more than just a task.

He suddenly got into a groove, where every delivery either whistled or nested past the bat and found the batsmen second-guessing. For all the pressure that he had created from one end, drying up opportunities, creating doubts in batsmen’s head, Anderson came into the attack to marvel at the audience. But there was Pant yet again, this time around, the battle was slightly more conservative – both of them didn’t want a piece of each other.

As England stood, putting their full efforts in breaking the partnership between Ravichandran Ashwin and Virat Kohli, it was Leach again, who sucked them out of the crease, tempting a shot. With the bounce that he generated on the day, it required a monumental effort from the batting pair to keep it down, which Ashwin didn’t possess, as Leach got his third. It was only a matter of time before he turned three into four, four into six for the entire game, and put on a show.

“They have a great batting lineup and I knew the pressure that comes with it. Happy to take some wickets and get the boys over the line,” Leach said post-game.

Having previously been well-known for his incredible 1*, Leach had almost found himself wanting for the worst record possible by an English spinner in these conditions before the fortune clock turned around.

After being driven out of the attack, plundered ruthlessly by Rishabh Pant, Jack Leach found incredible vigour and immense patience, all with a renewed focus. At the same time, for a spinner to learn on the go – that too in India – Leach not just unearthed one of the most blessed abilities but doubled it up dangerously with his strength and vigour, which galored at Chepauk.