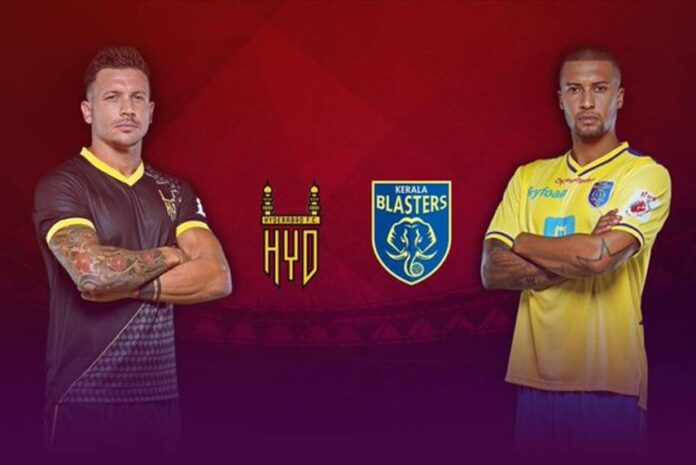 Hyderabad FC face Kerala Blasters in their next Indian Super League (ISL) 2020-21 fixture and will hope to turn their fortunes around. The team are right in the middle of an exhilarating race for the top four places and must win their game against the Yellow Army to stay in contention.As for Kibu Vicuna’s men, with nothing much left to play for, they might just play the role of party spoilers. The last three games present a chance for the tactician to show why the club must continue to have faith in him after the season is over.
With differing ambitions coming into this fixture, both the sides will give their best since the league phase is heading towards culmination. Lowly Kerala Blasters played out an entertaining 2-2 draw last time out with bottom placed Odisha and thus remain in tenth place without a win in their last five Indian Super League games. Here they face Hyderabad, who are unbeaten in nine matches with seven of those ending in draws including most recently vs East Bengal. Against inferior opposition, Hyderabad will likely throw bodies forward in an attempt to pick up three points and should be favoured draw no bet. However, such a tactic could leave them exposed on the counter attack and with Kerala having scored five goals in their last matches, they have the offence to take advantage of any space in behind. For that reason, both teams to score should also be considered.