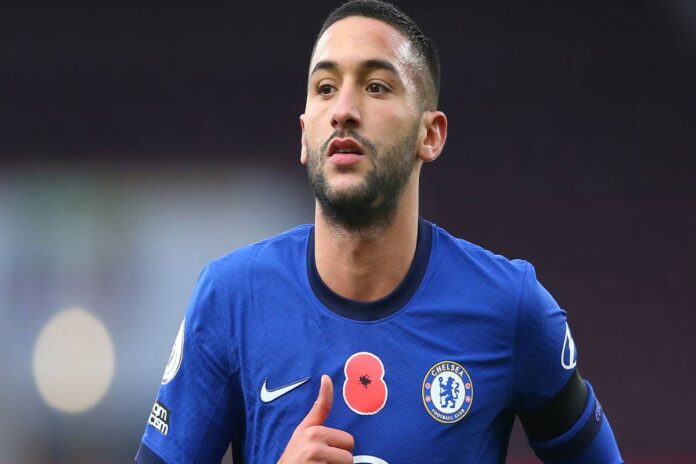 Chelsea’s Hakim Ziyech has admitted that he has finally begun to adapt and settle at Chelsea after what has been a difficult start to his time at Stamford Bridge. The former Ajax winger saw a knee injury and then a hamstring issue delay his debut and forced him to miss most of the winter schedule.

Despite a knee injury delaying his Chelsea debut, there was a lot of faith placed into Hakim Ziyech when the Blues signed him for a £33 million fee in February 2020. But so far, things haven’t gone according to plan with the Moroccan struggling for form amidst several injuries. It has seen him make only eleven league appearances so far with four goal contributions. Things are changing for the 27-year-old which has seen many fans claim that it has taken Ziyech a while to adapt.

That has been confirmed by the attacker when he admitted that things weren’t easy when he first arrived at Chelsea especially since he was without his family and friends. But Ziyech confessed that he has “started to adapt to things more and more” which has helped him adapt to the field. Not only that, the 27-year-old further added that he is waiting for a time where he can play in front of the fans again especially since he hasn’t gotten that chance yet.

“Yes, of course. I have now been here six or seven months and I have started to adapt to things more and more. At the beginning everything is new and it is nice but I really also love to be around my family and my mother and my brothers and friends, but at this time it is not possible. So after a while it was a little bit difficult but you start to get used to it. I have not met the fans properly yet,” Ziyech told Chelsea’s official website.

“The fans had a game when they could come to watch and then I got injured after 25 minutes against Leeds! Hopefully, better times will come and everybody will be able to come to the stadium.”