IND vs ENG | Don’t think the quality of batting from both sides was up to the standards, asserts Virat Kohli 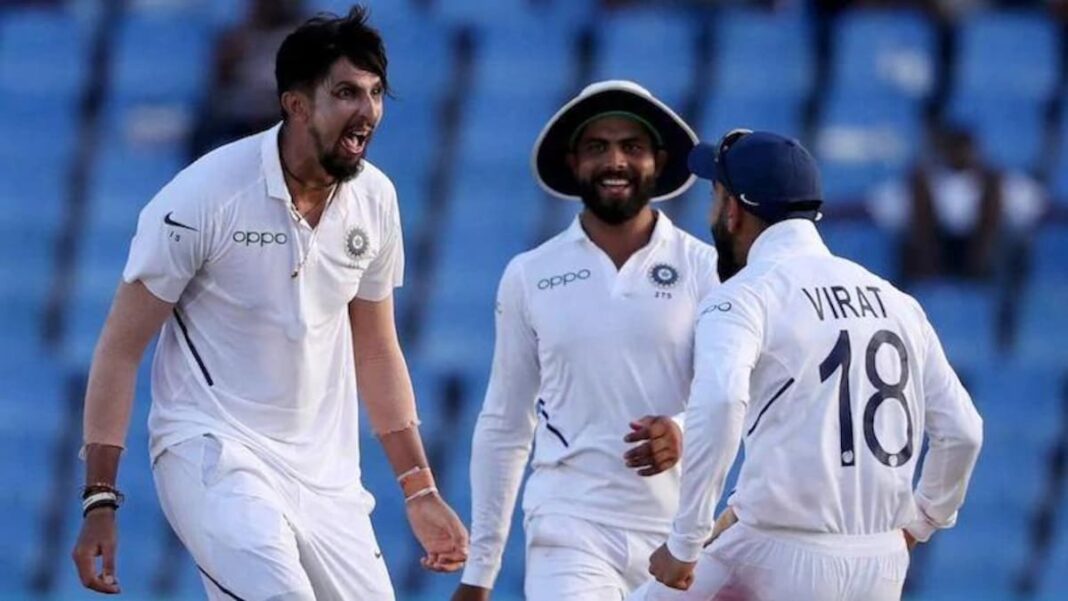 Ishant Sharma’s Indian career resembles the stock market more than in one way, the spectacular highs of leading the Indian pace unit and the despicable lows of being hailed as a ‘villain’ after a disastrous white-ball performance. But his success came relatively early, at the age of 18.

Ishant Sharma wasn’t just another teenager in Delhi but instead had set his big foot into world cricket, storming the Indian fans by surprise and catching their immediate attention. The world took note of the lanky pacer, who surely still was a hot-headed youngster, a teenage wolf – who was still celebrating every dismissal with an extra iota of aggression.

“Actually at that time, I was really new to setting him tactically up. I was just looking to bowl in the right areas and after 8 overs and then it all happened out of the blue. Viru (Sehwag) bhai came and asked me if I wanted to bowl one more over as Ponting was struggling, I said okay and bowled one more. I got him out in that over itself but I never planned as such for that,” Ishant told BCCI.tv in 2011.

In the hour that shook Ricky Ponting, the Australian dressing room and put the Indians into a sense of hysteria, Ishant Sharma was just bowling his normal length, that had already set him ablaze in domestic cricket. For the layman, the visuals were suggestive of a superstar, who had already played 10-15 Tests in the Indian whites but in reality, it was just his fourth Test and also his second in Australia.

The first one showed him the struggles of international cricket and the bends of playing against Australia at their own den, going wicketless. Come to Perth, a ground that had natural bounce and more seam movement, Ishant had already undergone a change in his planning, his bowling, with a conscious effort to bowl the fuller length.

“At 19 you don’t plan, to be honest [laughs]. You just bowl. When you play a lot then the planning starts, about what you should do and not do. I knew just one thing: I have to bowl in good areas and after that somehow I should get a wicket. And the more consistently I bowled in good areas, the greater the chances of me getting a wicket,” Ishant told ESPNCricinfo, stating that his aim was only to bowl

It could have gone either way, it could have resulted in him getting in and out of the squad or the reality that transpired. And then, “Ek aur over daalega?” happened and the rest is history. He was a hero, he was already hailed as the next big thing, with budding cricketers growing their hair just like him, with an aspiration to play for the country. He didn’t do anything different, it was a similar spell of the hundreds if not thousands that he had bowled for Delhi in domestic cricket but when it came to the attention of the world stage and media, he was crowned as a jewel.

“So, actually, I was surprised when I saw that spell and all the hype that followed. I felt it is my job – I do this daily in first-class cricket – that if I am bowling 20 overs in a day, I have to give 40-45 runs and I can get three wickets. So what I was doing in the Ranji Trophy, the same thing I was doing in the Test match,” he told ESPNCricinfo.

In between his debut series and the first real away Test against New Zealand, Ishant had picked 38 wickets, bowling in the sub-continent, on pitches that had honed his skills, in the first place, on pitches where pacers were never always in the game, on pitches where bending the back was the only way of getting success. From there on, there was always going to be added pressure, not because of just playing in conditions that favour pace bowlers but away from home.

If Virat Kohli learnt ably from the likes of Sachin Tendulkar, Ishant had picked the art from Zaheer and had always held a likeable corner for him. So in 2011, against England, when he got to play in the most favourable of conditions for him, it was a gift-wrapped in gold. When asked in 2011 about leading the side, a young Ishant, who had played around 33 Test matches stood up and admitted that he doesn’t mind leading the bowling attack.

“England is always a good place to play, the ground, the crowd, the pitches, obviously it has been tremendous. No real pressure of leading the pace attack, not a bad thing for me. I enjoy playing for the country and that’s all it matters, it’s not adding any pressure but it is a responsibility that I enjoy,” Ishant told the English press in 2011.

That year was all about Ishant, though, India had lost all their overseas tour in England and South Africa, managed a win in West Indies and ultimately wrapped the Windies yet again at home. Throughout the year, even with the Indian team’s ups and downs, Ishant had picked up 43 wickets, at an average of 36.69, with two fifers and one ten-fer. While he got wickets in plenty, there was always a concern that surrounded his bowling – the bad balls, the deliveries that garnered a wrong interest around him. With Zaheer Khan on the last leg of his international career, could India trust Ishant to oversee the new generation of Indian pacers?

While Bhuvneshwar Kumar was still growing as a bowler, Ishant was already tall in the pecking order, having earned his merit at a very young age. Although he did earn it, it was always a question of whether he would live upto the expectations of the Indian fans, that always startled him. Most of his wickets during that period came away from home, an average of 35, with 43 wickets at a strike-rate of 60.8, far from being the best in the world.

And then came in the period that would always egg Ishant – the phase where he was called a ‘villain’ for conceding 30 runs in an over. The flashy news channels had him all over the television, with his visuals aided by the sounds of thunder, the visuals of lightning on his face and the aided one of James Faulkner doing the damage. It wasn’t a World Cup, it wasn’t even a World T20 but a bilateral series where Australia got the better of India, from a rather improbable situation. That was also the start of the end of his white-ball career.

Success and failure – two things that can either overwhelm a person or can put them under the sea. It was the former that hit him during his teenage years and it was the latter that hit him after he had earned his relative success. Now if that was white-ball cricket, his red-ball form too hit a low, his deliveries were often on the legs, it was often not on the mark, which prompted a change in the Indian bowling attack, with Bhuvneshwar Kumar already upping the ante as a bowler.

Until the 2018 season, he had picked up 39 wickets, in three years, which was preceded by the best point of his career (38 wickets in 2014) and succeeded by a better one (41 wickets in 2018). In between those years, there was Ishant, the bowler, who was struggling for his line, length and plenty of issues with his fitness, where his age too came under the question. In a country where the availability of cricketers is never a question, Ishant had to give an answer, an answer that would solve all the issues, once in for all.

KO: Sat, 27.02 @ 01:30 ISTRennes continue to slide down the table with their poor run of form showing no signs of coming to...
Read more
Editor Picks

Both England and India played at the pace of TV Umpire C Shamshuddin on Day 2 as remarkably, thanks to a ludicrous 17 wickets...
Read more
Cricket

Ravichandran Ashwin, who today joined the elusive 400-club, admitted that fate had a hand in his resurrection and conceded that he might not have...
Read more

KO: Sat, 27.02 @ 01:30 ISTRennes continue to slide down the table with their poor run of form showing no signs of coming to...
Read more
Editor Picks

Both England and India played at the pace of TV Umpire C Shamshuddin on Day 2 as remarkably, thanks to a ludicrous 17 wickets...
Read more
Cricket

Ravichandran Ashwin, who today joined the elusive 400-club, admitted that fate had a hand in his resurrection and conceded that he might not have...
Read more
Featured

IND vs ENG | Don’t think the quality of batting from both sides was up to the standards, asserts Virat Kohli

Virat Kohli has stated that the quality of batting from both sides was not up to the standards as the batsmen failed to apply...
Read more

IND vs ENG | Comments From Joe Root About My Departure Was An Honest Mistake, Claims Moeen Ali

Moeen Ali stated that Joe Root's comment that 'Moeen chose to go home' was an honest mistake and the issue was sorted straight away...
Read more

It’s Over For Us In Premier League But Our Target Is Winning Champions League, Admits Sadio Mane

Sadio Mane believes that Liverpool’s chances of retaining their Premier League title is over but added that the Reds are now targeting the Champions...
Read more

Both England and India played at the pace of TV Umpire C Shamshuddin on Day 2 as remarkably, thanks to a ludicrous 17 wickets...
Read more

Ravichandran Ashwin, who today joined the elusive 400-club, admitted that fate had a hand in his resurrection and conceded that he might not have...
Read more