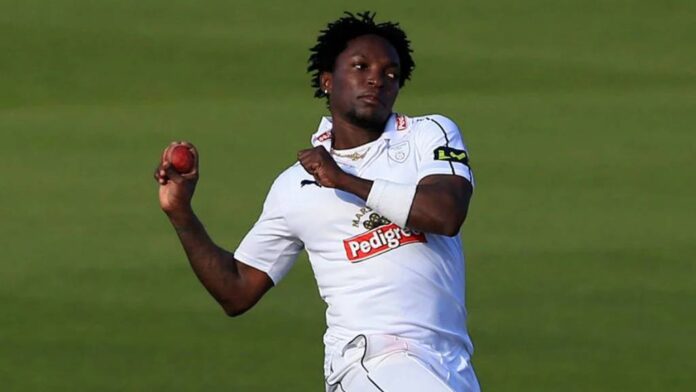 West Indies speedster Fidel Edwards, after a successful Kolpak stint with Hampshire, has confirmed that he is open to playing again for the West Indies national side after a 9-year hiatus. Edwards also stated that he is keen to enroll his name in the auctions for the 2021 edition of the IPL.

Despite breaking onto the world stage as a 21-year-old and making a name for himself as one of the most exciting fast bowlers in the world, Fidel Edwards’ international career never took off and in 2015, the Barbadian signed a Kolpak deal with Hampshire. Edwards enjoyed an extremely successful stint in England, spearheading the Hampshire pace attack for five seasons, but fully and exclusively contracted to the county side meant that he was ineligible for national selection.

However, UK’s departure from the European Union putting an end to Kolpak registrations opened the door for the speedster to make a potential West Indies comeback, and, as a result, Edwards, after a 9-year-hiatus from international cricket, has declared his availability for national selection. Speaking to ESPN Cricinfo, Edwards revealed that, despite being days away from turning 39, he has never felt ‘fitter’.

“I have made myself available for West Indies. I have spoken to Kieron Pollard and Phil Simmons and let them know that, if there’s any opportunity, I’m ready,” Edwards told ESPN Cricinfo.

“Training has always been a big part of my game but, in the last 18 months or so, I’ve changed what I do and I’m the fittest I’ve ever felt.

“I’ve had my time in England and now I’ve made myself available to represent West Indies again. I think I did pretty well in the CPL and I’m keeping my fingers crossed.”

Edwards featured in the 2020 edition of the Caribbean Premier League, and is currently representing Delhi Bulls in the Abu Dhabi T10 League, but the 38-year-old has bigger aspirations. The 55-Test veteran revealed that Hampshire commitments forced him to stay away from the Indian Premier League (IPL) but claimed that with him now a free agent, he is keen to enroll his name in the IPL auction. Edwards last played in the IPL 12 years ago, representing the Deccan Chargers.

“I enjoyed my time at Hampshire, but that was a big part of me not playing in the IPL. “But now I’m not with them, my aim is to put my name back out there and hopefully get another chance to play. Anything is possible,” the 38-year-old said.

Fast bowlers, in general, tend to run out of steam in their mid-30s, but that has not been the case with Edwards, who as recently as four months ago, in the CPL, clocked speeds north of 145 kph. The 38-year-old asserted that he still bowls fast and takes wickets and would be ready to grasp any opportunity that comes his way.

“I still love the game and I’m still doing what I do best: bowling quickly and taking wickets. You never know what can happen. But if the opportunity comes, I’ll be ready.