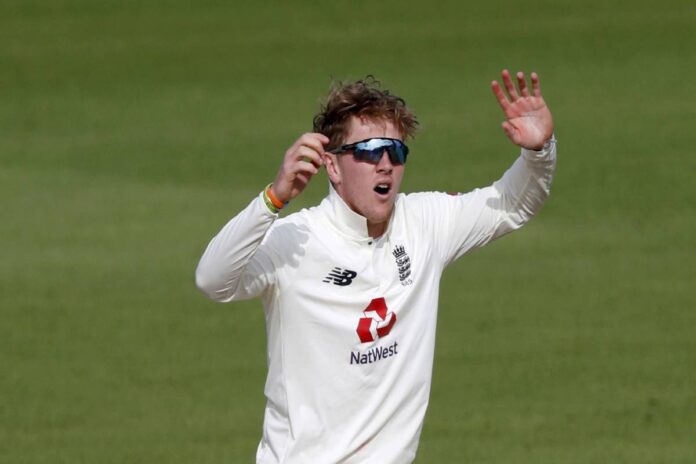 Sunglasses on, a slow run-up quickly turns into a steady one, a shimmy before a release that sees the ball spin and turn – an account of Dominic Bess’ performance on the third day of the first Test in Chennai.

The scene was set, the sun still sparkling with no mercy on the bowlers and a physically tired batting unit in front, Dominic Bess had everything on his side to announce his arrival. Coming into the series, he was definitely destined to lead the spin attack but he hadn’t quite arrived yet in the longest format. Every time, he picked up wickets, it was quickly shut down as luck, poor batting or just great fielding. Enough of that!

Chennai, one of India’s better-suited conditions to spin bowling had just shown the hosts that it wasn’t true to the words on the first two days of play. There was certainly going to be jitters, especially for the visiting spinner, who is yet to see real pressure of facing the mighty Indians. The talks of comparison with Graeme Swann naturally followed but Bess, being Dominic couldn’t care less.

His journey arguably started with a high before rejection came kicking in – having made his debut against Pakistan at the mighty Lord’s in 2018. He went wicketless, scored a 57 in the second innings but being the only spinner, the head was always with a bounty. When he went to Leeds, he walked in as a nightwatchman, continued as a batsman and ended up as one of the best spinners across teams on the day.

Yet when the time came, he was chucked out for Jack Leach and Moeen Ali in the Ashes, ripped apart even at Somerset, being pushed to the second XI. The highs were high and the lows terribly low – for the youngster, who had big shoes to fill, a tall mountain to climb. The steps to the mountain certainly weren’t all glory – it had stages where every second step was a false one and the third, with doubts attached behind it. All he could manage is to get into the squad, rather narrowly against South Africa during the 2020 series, a bout of luck could go a long way in boosting his confidence.

But as fate would have it, as it had his entire career – a lucky break came his way, where he got an opportunity to showcase his skills in South Africa, another daunting place to play as a spinner. At the first opportunity, he had to go through the rigour, the vale of being a Test match spinner in South Africa, setting up the batsmen. As luck would ride it, Dean Elgar with a pretty poor shot found the fielder and that kick-started his second innings. One luck found another and Bess had two wickets in his first outing in South Africa.

Within a few overs, one turned three in his second Test against the Proteas and his Test career had suddenly seen the rising sun. As Rassie Van der Dussen walked back, he had his first fifer, in South Africa, under pressure, which made it sweet but no guarantees were attached, as the riding luck could always step out and walk away. An entire English summer saw him show plenty of potential without much consistency and luck.

Moeen Ali was back in the squad, it was Sri Lanka, a side that Ali had previously tormented. There wasn’t a better opportunity for England to have Ali run round the Sri Lankan circles before their showdown fixture against India.

Entered one of Bess’ consistent friends during his international career – luck returned, right in time for the first Test against Sri Lanka. That was it, that was really the kick-start to his career, a fifer at Galle, where the fifer could literally be written on Luck’s profile, instead had Dominic Bess’ name all over it. His reaction, however, was well-measured, showing maturity at the age he was still finding his feet in international cricket.

“It’s a proud moment because I’ve taken five wickets for England and no one can take that away from me. I probably haven’t bowled as well as I could have, and I got away with one or two but that’s cricket. I’ve also bowled very well on days and haven’t taken any poles,” he acknowledged how luck has been a constant part of his cricketing life.

Suddenly his average had seen a sharp turn, from averaging 40 with the ball in 2020 to averaging 20.68 with the ball in 2021. The year was well within his rights of converting his luck into a golden one. Sri Lanka was just one part of it, where he emerged as a small picture in the world of Root. However, the realisation suddenly started gaining momentum – he didn’t get all the luck without any effort! It had to be attributed to the long spells, the ones where there was nothing going his way – absolutely nothing; rotten luck – dropped catches and missed stumpings.

But when you come against one of the best teams against spin bowling – in India – that too on the first tour to the country, it immediately puts one under the pump. Under the pump, here also means that one could see the end of one’s career. There were no in-betweens, no one has come back from the country half-successful, ever! On top of that, the impatient wait to get the cherry and have a crack amidst the cracked-paper at Chepauk, Bess had a real opportunity to leave an indelible mark.

Archer had just created ripples, Anderson had seeded some doubts in the batsmen’s mind but when the spinners were introduced, lunch was around the corner. And when they came back, one of the best players of spin – Virat Kohli was at the crease. There were talks of how he was revitalised after a break, wanting to rip apart the English bowling unit. At the other end, the talk with Bess was always surrounded by – how much more can he get lucky? Does he deserve all the luck?

Bowling slightly wider from the crease, some drift, some air going his way, turn and bounce, what has happened here? Kohli walks back, but what has Bess really done? In the last three overs that Kohli had faced prior to the snarler, the off-spinner had set him up properly, consistently tying him down at the striker’s end. Gaining enough momentum and confidence from this, Bess produces a spicy delivery to get the prized scalp.

“I was just trying to bowl at a spot, trying to build pressure for a long time, and I guess it just happened. It wasn’t like I was trying to bowl that magic ball. It was really just about hitting that box. I saw the replay and it seemed to [drift] a little more and got him playing at a wider line, and I’m glad Popey took a great catch at short leg,” Bess said of Kohli’s wicket.

Bess had arrived, this time without it being tainted, lucky or a poor shot played from the batsman – the off-spinner, the 24-year-old had just dismissed Virat Kohli, the Indian skipper, one of the best batsman in the longest format. All on the back of sheer skills, utmost patience and truly spectacular bowling. Daring Dominic didn’t wait for luck to come his way, he rather made his own luck in Chennai’s heat.