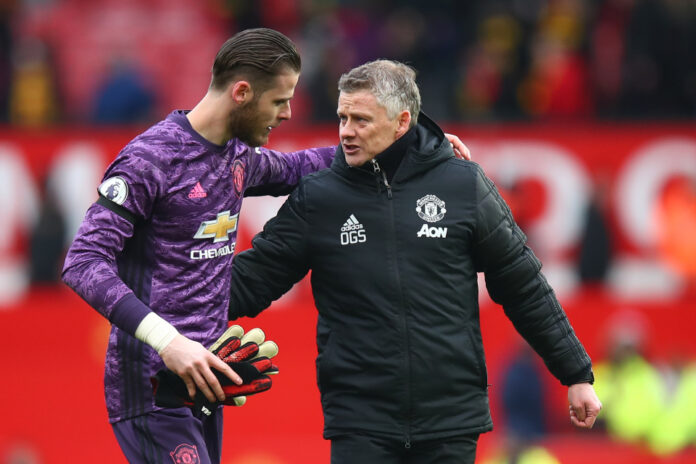 In light of David De Gea’s struggles, Ole Gunnar Solskjaer has confessed that past glories will not guarantee the Spaniard a place in the starting 11 at Manchester United. The 30-year-old has struggled for form over the last few weeks and reports indicate that the club are looking to rotate him.

Despite an uptick of form this season, David De Gea has still been more than prone to the occasional blunder as his performance against Everton showcased. It allowed the Toffees to claw their way back into the game via a late equaliser by Dominic Calvert-Lewin. However, the game has since been remembered for the errors made by De Gea especially with that tally rising game by game.

That has seen many fans and critics alike call for the 30-year-old to be dropped in favour of Dean Henderson especially given the lack of game-time the young goalkeeper has received. But Ole Gunnar Solskjaer has admitted that while De Gea’s place in the starting eleven is far from a guaranteed one, Henderson himself also has to perform to earn his place. The Manchester United boss further added that everyone in the squad has to do the same if they want to earn a place on the team.

“It’s not about who has got the most trophies. I’m in a very fortunate position to have the ­goalkeeper department that I have – and it was a conscious decision to bring Dean [Henderson] back to have real competition. Dean has made it harder and harder for me, of course, to leave him out because whenever he plays he does really well. It’s about what you give to the team, here and now – whether you’re a left-back, right-back, on the left wing or right wing,” Solskjaer said, reported Goal.

“I think the whole squad knows they have to perform to be in the team. We have, I would say, at least two players in every position who would feel ‘I am a first choice’. The keeper position is no different to the right-back, left-back or centre-forward position. It’s about your performances and what you give to the team.”