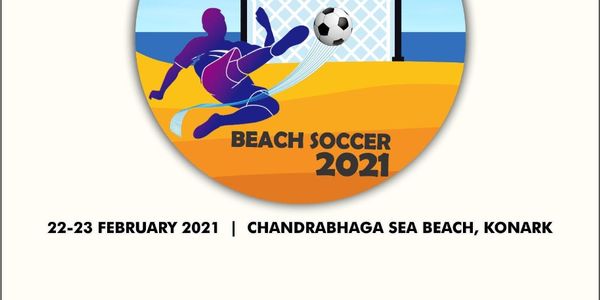 The 2021 CII Beach Soccer is set to begin on February 22 in Konarak, Odisha, with ten teams including Tata Steel and Indian Oil set to take part. Odisha FC is the Technical Partner of the CII Beach Soccer 2021 to be held at Konark in association with the Department of Tourism, Government of Odisha.

The first of its kind beach soccer festival in Odisha “Beach Soccer 2021” will be held on 22nd and 23rd February at Chandrabhaga Beach, Konark. The event will be organised by the Confederation of Indian Industry (CII) in association with Department of Tourism, Government of Odisha. Odisha Football Club (OFC) will be the Technical Partner of the event.

This is a maiden Initiative to integrate football and the mesmerizing coastline of Konark. Ten teams – Jindal Steel and Power, Nalco, Tata Steel, Gupta Power, Indian Oil, CSM, Paradeep Phosphates Limited, Paradeep Port Trust, GRIDCO and Capgemini will be playing and have been divided into two groups.

The matches will be of 12 minutes each with 3 minutes break and under lights. All matches are scheduled from 4 pm on 22nd and 23rd February. The final game is scheduled to be played at 6:30 pm on 23 February. There will be two exhibition matches as well which will be played between CII and the Women’s team on the final day.

“I am glad that Department of Tourism, Government of Odisha is partnering with CII to organise the Beach Soccer on 22nd and 23rd February at Chandrabhaga Beach, Konark. I strongly believe that this will go a long way to achieve dual goals of promoting Odisha tourism as well as sports to a global audience,” said Shri Vishal Dev, IAS, Secretary, Department of Tourism, Government of Odisha.

Explaining more, Mr Suvam Das, Grassroots Manager, Odisha FC said, “We are extremely delighted to be a part of this unique event which brings together the beauty of Odisha’s coastline and the beautiful game of soccer. Our club is dedicated towards any such program which promotes football and we are thankful to CII and Odisha Tourism for this lovely initiative.”