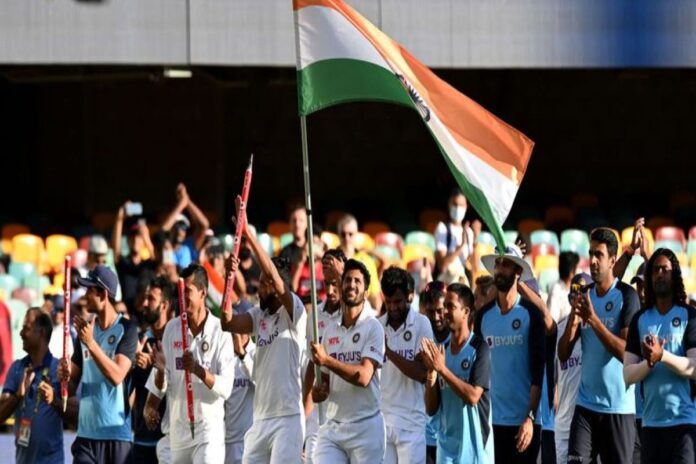 Grit, gumption, determination, character, intent, approach, audacity, and much more. The Indian Tour of Australia 2020-21 will surely be remembered as much for the kind of cricket India played in the southern hemisphere as for the raving qualities they had been bestowed upon.

But did anyone complain? Or did anyone flinch as Washington Sundar audaciously hooked Pat Cummins of all people for a six to send shivers down the spine? Rishabh Pant looked more assured than he has ever been in his life. It was all happening at the Gabba as India believed. A country of 1.5 billion people gathered their senses, as journalist Barkha Dutta quite aptly said, the country was “in a paroxysm of hysterical pleasure” that arrived from the Test of their lifeline.

Woolloongabba – The Fortress. We all know the context, we know how many dreams had come crashing down at the Gabbatoir. Thus it will take ages to make sense of the win, the emotion, and how this Indian side, bruised, battered, and abused along the way, made Australia their bunny in their own land and marched along like fearless warriors.

But once the hysteria settles down for good, this bunch of cricketers and a few net bowlers will look back and smile at the biggest achievement of their lives. But more importantly, they’ll also look back at the process and how they never let any distraction come their way and never let the Aussies crack them down in their historical process of mental disintegration.

It is this legacy that’ll speak louder than anything else, for these bunch of Indians have sent a new course to many leadership books of how not to be bogged down by adversity and never lose the originality in the process of teaching someone a lesson. If anything, poker-faced Ajinkya Rahane’s calmness in making decisions, the Indian team management’s no-excuse-works rule, and being brave in front of the tragicomedy that was happening in front of them would do a world of wonders as this team prepares to take the world head-on. Brisbane or Brabourne, Melbourne or Manchester, they will look back at this monumental achievement and take inspiration every time the chips are down.

From Tim Paine to Matthew Wade, from Michael Clarke to crazy Aussie media outlets, everyone wanted to chide the Indians, making a narrative of India’s fear of being rolled over in Brisbane. The Hard quarantine regulation when the crowds were happily mingling in the stands, the racism and abuse in Sydney, the insane number of injuries could have broken India’s back and they would’ve been forgiven for an innings defeat at the Gabba. But they didn’t care and never for a second let the adrenaline take over.

Ashwin would’ve been forgiven for hitting a rash shot after being pushed to the brink but he didn’t. Pant would’ve been forgiven for throwing his wicket away but he didn’t. None would’ve minded Hanuma Vihari leaving the scene immediately after pulling the hamstring but he didn’t. It was absolutely fine if Mohammed Siraj attended the funeral of the man who has given everything in his life to make him a Test cricketer but he didn’t. He stayed the course, smiled, and showed the abusers a way of life. Siraj has become a hero for millions of Indians for his courage and bravery, without having to do anything else that the Aussies wanted him to do.

India have not only won the hearts for their never-say-die attitude but also sent a dazzling reminder that playing Australia in their own den is as much about your own psyche as showing naked aggression. The latter works brilliantly for Virat Kohli and he leads in his own way. Those who played under Ajinkya Rahane don’t believe in any of that and they have become successful in their own way. In extension, this is the contrast that defines Indian cricket and its rich reservoir. It is no more a unidimensional functionality of personality syndrome. It is not even a convulsion of a cutting-through-the-roof speech either, it is rather the making of a Mantra that reverberates in the vein of these cricketers.

And that confidence, sans the cockiness, was the story of the tour. This tour was important from an Australian perspective and a No by India would’ve put their cricketers and the board in a submissive situation for financial instability. India knew the pain of being in the bubble, but if they would’ve wanted to be anywhere playing cricket at that time, it was always Australia. The sheer magic of seeing the cricket fans in the stadium once again and the freedom to go out of the hotel room and have food outside were some luxuries they wouldn’t have traded for any other bubble life.

Now they’re out of the bubble and in a few hours’ time will be reunited with their families to celebrate something more than what we think their lives are. T Natarajan will hold his baby girl for the first time in his arms, Siraj will go back to his family where he won’t have his smiling father welcoming him to the house, but will be consoling his mum, Washington Sundar will reach Chennai as a proud all-format India cricketer and a family that saw a dream together will smile together. This will be about Cricket, sure, but this will be more than just cricket. And that’s the legacy that will stand the test of time even if we fail to take notice of any of them years later. Australia will think of a missed opportunity but they would also think how this Indian team never took their bait and marched along. It was a first and no one will ever forget.