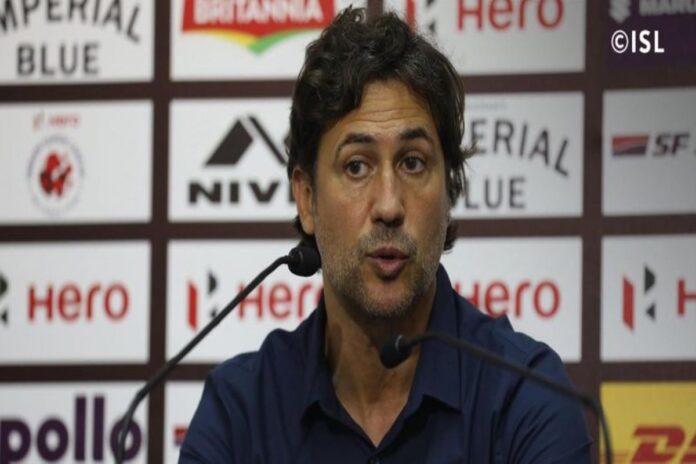 Bengaluru FC head coach Carles Cuadrat is convinced that they lost dynamics in the last couple of games that resulted in consecutive losses against ATK-Mohun Bagan and Jamshedpur FC respectively. The ‘Blues’ are currently placed at the fifth position in the table with 12 points from eight matches.

Surprisingly, Bengaluru FC has failed to fire as expected from them in the ongoing season, with them having won just three matches in their eight so far. Their last win was against a weak Odisha FC side, following which the ‘Blues’ suffered two back-to-back losses against ATK-Mohun Bagan and Jamshedpur FC. Their head coach is convinced that they lost some dynamics in the last couple of games, which led to the downfall, while they await an uphill task against Mumbai City FC this Tuesday evening.

“We had some more time this week and we will try to fight for three points again. In the last two games, the team was trying to create some chances to score but unfortunately, we lost some dynamics. The good thing is we got some goals from other players. That means that the team is working to get goals from different players and not dependent on a specific player,” said Carles Cuadrat, ahead of tomorrow’s game.

Udanta Singh, one of their core players, missed the last game against Jamshedpur FC owing to a muscle injury but would be available in the upcoming one. Even though the winger has not played as per his potential in the ongoing campaign, the manager is not losing hope on the Indian international at all.

“He was not in the last game because he had some muscle issue. He’s one of my favorite players and knows that he has to improve in making decisions. He has my support and he will be available in the next game,” added the Bengaluru FC manager.