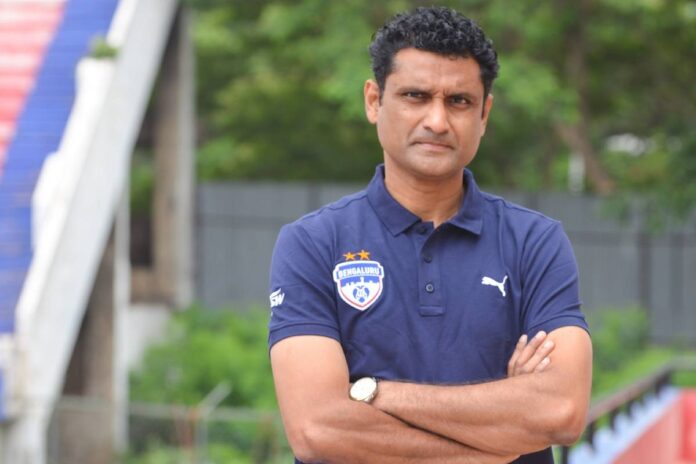 Bengaluru FC head coach Naushad Moosa has clearly stated that his side have not given up on their hopes of making it to the playoffs this season. The Blues are without a win for more than a month, having last claimed full points against Odisha FC, on December 17, last year.

Bengaluru FC are arguably having the worst season in their short yet glorious journey in Indian football, having won just three of their 14 matches so far. With their long-standing head coach Carles Cudrat sacked earlier on this season, the ‘Blues’ are still going through self-recovery under the supervision of caretaker manager Naushad Moosa. But, the interim coach is still not losing hope and believes that they can still make it to the play-offs this season, even though the team is yet to win a match since December 17, last year.

“We are trying to balance things. We have not given up for play-offs. But we are giving them time to prepare for next season. So, the idea is there to prepare our team for the next season also. It is important for them to understand the level of ISL as it’s totally different. So, giving them 20-to-30 minutes to understand the pressure and level of the game,” said Naushad Moosa, ahead of Thursday’s game.

Meanwhile, Hyderabad FC have taken their game to the next level this season, with them currently at the fourth position in the league table, with four wins to their name. Moosa is aware of the threat but feels it is very important for them to win the game.

“They (Hyderabad) are pressing well. They are playing well between the lines. We will try to use the spaces that they leave. They are a good team. The way we are on the table we have to go all out and play more attacking football to get those three points. It is open for everyone. NorthEast have got two wins in a row. It is very important for us to win the next match,” explained Moosa.