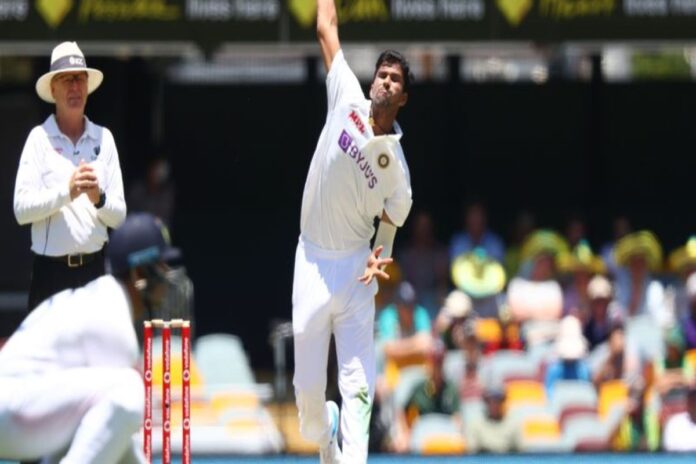 Washington Sundar, who made a vital breakthrough of Steve Smith, has reckoned that the visitors did great as a bowling unit to reduce Australia to 274/5 at the end of the day’s play. He also stated that the last 24 hours have been crazy for him and added that it is a dream come true moment for him.

Washington Sundar, who made a decent impression in the T20I series against Australia, was asked to stay back by the management, aiding the team’s preparations for the Test series. While he stayed back as a net bowler, injuries to Ravindra Jadeja forced the management in handing him a debut cap, as an all-rounder despite not having played First-Class cricket in two years.

Having not featured in the first three Tests, the off-spinner immediately made an impact when he was handed the ball, with three tight overs, where he had Steve Smith on the ropes. Eventually, the Australian was tempted into a false stroke, which led to his dismissal, giving the off-spinner his maiden Test wicket. In the post-match press conference, Washington admitted that the visitors did a great job of reducing Australia to 274/5 at the end of the day’s play.

“Like any bowler, it is so fun to bowl so many overs. And we had some plans against Marnus Labuschagne and Steve Smith. It felt really good to pick the first wicket today. As far as today’s day is concerned, everyone felt that wicket was good for batting. There was a bit of spongy bounce earlier in the day and we did a great job early on to reduce them,” said Washington in the post-match press conference.

After having stayed back as a net bowler, the Tamil Nadu all-rounder revealed that the last 24 hours have been a crazy time for him after the management asked him to be ready for the game. He also stated that it was a dream come true moment for him to feature in the Indian Test playing XI.

“First of all, I should thank the management for asking me to stay back in Australia, which has helped me improve as a batsman and bowler. Yes, the last 24 hours have been crazy for me, management asked me to be ready to play this game. It was a dream come true moment for me and I dedicate it to my family, without their support and thoughts, it would have been tough for me. Also to make a debut in a country like Australia, it feels good,” he added.

He also insisted that it was a big opportunity for the players to represent the country, in a tough cricketing place like Australia. While admitting that there was a bit of nervousness, Washington revealed that it was quite amazing for him to make the most of his debut.

“Well yes, it is a big opportunity for us (Washington and Natarajan) to represent our country, that too in Australia. I was really excited and I just wanted to bowl a lot and pick wickets. Yes, there was a little bit of nervousness but more than anything, it was an amazing experience to make my debut.”

However, injuries continued to haunt the visitors, who had Navdeep Saini walk back with a groin strain. Washington revealed that they have their fingers crossed for the pacer to mark his return on Day 2.

“To be honest, I have no idea (about Saini’s return), I have my fingers crossed and hope he bowls the first over tomorrow for us.”