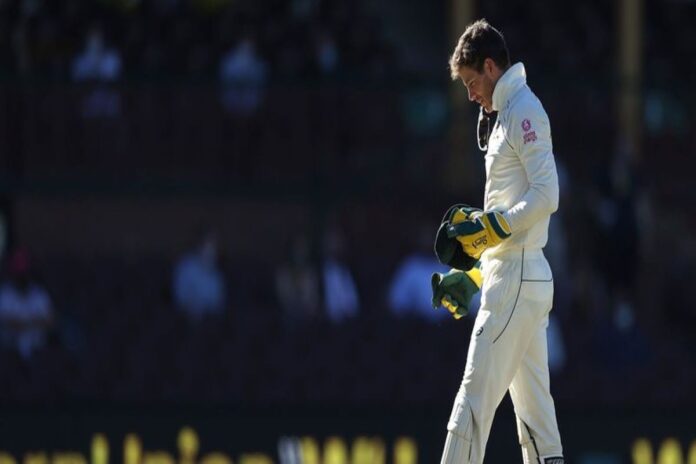 Following a nasty Sydney Test where Tim Paine was constantly in the ear of the batsmen and the umpires, the wicketkeeper has admitted that it was a poor reflection of his leadership and apologized. Paine also clarified that there was no malintent from Steve Smith after footage surfaced.

Australia had a poor day on the field, their bowling seemingly was struggling, their fielders were consistently under the radar for dropped catches and their skipper put on one of his worst performances as a captain. While he did address the press after the conclusion of the Test, Australian skipper Tim Paine called for another press conference just to apologize for his conduct on the field.

In specific, the Tasmanian was involved in quite a dose of controversy during the Test, including dropping the f-bomb to the umpire Paul Wilson audibly. While that eased past during the day, Paine on the last day of the Test was constantly chipping away at Ravichandran Ashwin in a rather nasty manner, which has irked all the fans. Paine in the press conference he arranged, expressed that the Test was a poor reflection of his leadership and apologized.

“I’m someone who prides themselves on the way I lead this team and yesterday was a poor reflection. My leadership wasn’t good enough, I let the pressure of the game get to me. I’m human, I want to apologize for the mistakes that I made,” Paine told reporters, reported CA.

“I raised it with him (Langer on Monday night). My mood throughout the whole Test match was probably a little bit off. I’m normally a pretty relaxed person. When we were batting in this Test, I was on edge. I was wandering around the change rooms, couldn’t sit still, couldn’t watch and I think that added to the tension,” he added.

Another controversy that sparked on Day 5 was when Steve Smith was visibly taking guard as a left-handed batsman. While people on the internet called it ‘malicious’ and with an intent to irk the Indian wicketkeeper, Rishabh Pant, Paine stated that there wasn’t anything guilty in it.

“I know he’s really disappointed with the way it’s come across. If you’ve watched Steve Smith play test cricket, that’s something that he does every single game five or six times a day,” he reinstated.

Paine also specified that Smith’s habit of shadow batting got the better of him on this occasion but reiterated that there was nothing malicious about his shadow practice. He also insisted that if it indeed affected the Indian batsmen at the crease, they would have informed the officials.

“He’s always standing in the batting crease shadow batting. As we know, he’s got those many Steve Smith quirks and one of those is he’s always marking center. He was certainly not changing (Pant’s) guard and if he was, that’s something that the Indians would have kicked up a bit stink about at the time.”