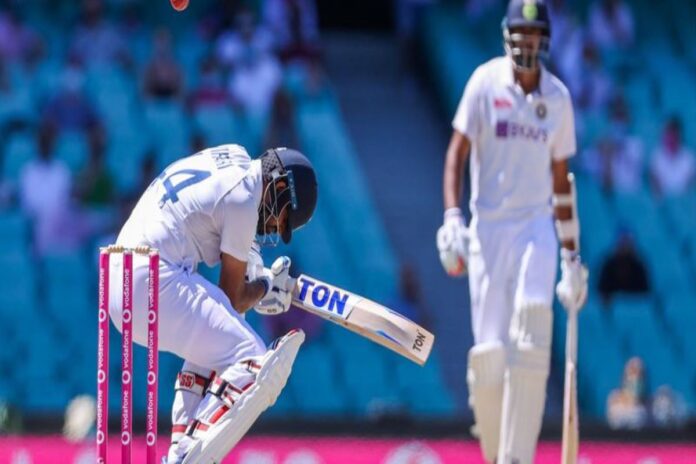 Test cricket won’t get better than this. It simply won’t. Good bowling, great batting, torn hamstrings, heroic cameos, banter, sledging, controversy, drama – day 5 of the SCG Test had it all. Just when we thought India could not oudo their MCG heroics, here they are, a week later. Phew.

One of the radical ideas that was thrown after India’s first innings at SCG was to promote Rishabh Pant to No.5. The thinking behind it was that Pujara, Rahane and Vihari, because they mirror each other, needed to be separated to provide better flow to the innings. Whether it was a prudent tactic or if it was a decision influenced by Pant’s injury remains to be seen, but team India sent the southpaw at No.5 today. And bloody hell it worked.

To understand the impact of Rishabh Pant’s innings, consider this: Australia removed Rahane in just the second over of the day, and at 102/3, were eyeing to finish the game off as soon as they could. Yet at lunch, they were clutching at straws and were staring at a potential defeat. After looking in pain and uncomfortable initially, it was as if the boundary Pant struck off Lyon on his 37th ball completely unshackled him. Up until that point, he was 7 (36). What followed next was the most absurd display of Day 5 hitting: in his next 28 balls, he hit 3 sixes, a handful of boundaries and brought up his fifty. For the first time in the series, the bowlers had been deflated, demoralized and thrown off plans.

This knock may or may not influence India to employ Pant as a specialist batsman in the long run, but it definitely has shown them what needs to be done at the Gabba. Pant needs to bat in between Rahane and Vihari to not just galvanize the middle-order, but to keep the Aussie bowlers in check.

The duality of Che Pujara

It would be a grave injustice to Cheteshwar Pujara’s sheer batsmanship if he goes unmentioned on a day where he compiled what was one of the finest knocks of his career. For as much as India’s spirited showing on the final day was about the audacity of Pant, it was also about the tenacity, versatility and duality of Pujara.

On the back of his first innings fifty – the slowest of his career –  for which he got chastised, it was pretty much pre-conceived by everyone that Pujara was going to shut shop. It just seemed unfathomable that a guy who was striking at under 30 in the series would magically eschew his tuk-tuk approach, particularly on a day which demanded no-intent batting. Little did we know that he had the biggest surprise in store.

In just the second ball he faced of Nathan Lyon on the day, Pujara shimmied down the track and flicked it for a 3. Generally these are anomalies, but today it was the order of the day.

Let’s say Pujara, today, played the knock people wanted him to play on Day 3. He was on the lookout for runs throughout the course of his innings and, apart from brief periods, he never really let any Australian bowler settle. He manipulated the field with mastery, cut, drove and even pulled with authority and rotated strike enough to frustrate the Aussies. He showed intent in abundance, and that India were aiming to chase the target down after lunch was down to more than just Pant’s exuberance.

India’s bravery and gallantry – what can I say?

Ravichandran Ashwin certainly wasn’t playing mind games when he said yesterday in the presser that India will battle it out like warriors on day 5. Heading into the final day, with a seemingly impossible task at hand, few would have blamed India had they folded without a fight. After all, heading into the day, two of their premier batsmen were injured, of which one was not even fully cleared to bat. They could have given up, packed their bags and went home early and no one would have batted an eye. But not for a fleeting moment did that thought strike the mind of the players.

Only two words can rightly capture the bravery and doughtiness displayed by the Indians today: Holy s***.  First you had a 23-year-old kid, unsure of his place in the team and always under heavy scrutiny, bat out of position with a severely bruised elbow walk in to bat in just the second over of the day and score a counter-attacking 97 through unbearable pain. He not only just bats, he slays the opponent and puts his team in pole position to win.

Then you have an out-of-form batsman certain to get dropped very soon, perhaps playing for his career, pull his hamstring as soon as he walks in. Unintentionally he has taken a win out of the equation. He could so easily retire hurt – people on social media were crying for him to do the same – but he doesn’t. He instead bats on one leg, spends 4 hours at the crease and faces 110 balls, all the while knowing he cannot run.

Next to him is an all-rounder who hasn’t played a decent Test knock in two years. He is taking blows to his chest, arm, fingers and shoulder ball after ball, and is being berated by the opposition captain for ‘wasting time’, when all he is trying to do is protect himself. He, too, could chicken out, but he doesn’t. He instead goes ahead and faces over 100 balls, when he clearly has no business doing so.

They combine together to protect their mate who is sitting in the dressing room with a broken finger, and in the process end up saving the Test for their country.

Cricket matches are referred to as ‘battles’ figuratively, but this was a full-fledged war where warriors put their body on the line for the country. For Australia, this was a missed opportunity, for India, this was their greatest result in Test cricket since Eden Gardens 2001.