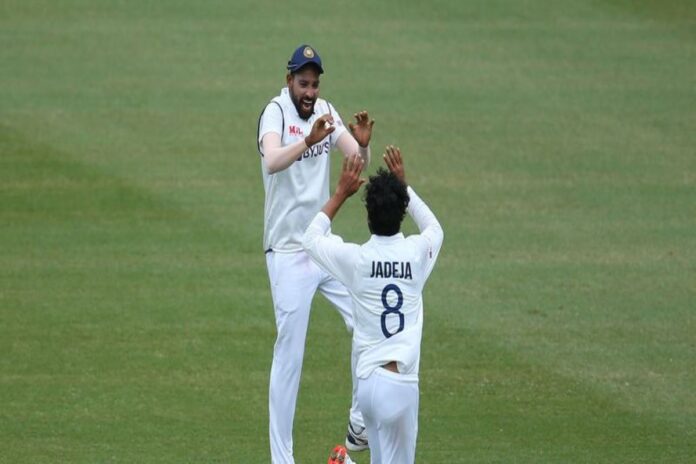 Australia resumed Day 2 on their overnight score of 166/2 in overcast conditions, yet despite there being a tinge of swing on offer, the Indian seamers, interestingly, opted to bowl defensively with the tried-and-tested leg-side ploy. Both Bumrah and Siraj, initially, were content to bowl defensively to the pads of Smith and Labuschagne and keep the runs down, and this was a decision that did not go down well with the commentators, who questioned India’s tactics. The pressure built, however, eventually helped the team strike jackpot as the Australians lost their last 8 wickets for just 172 runs, collapsing on a wicket that was just about perfect for batting.

One of the architects of the collapse was Ravindra Jadeja, who picked four wickets, and speaking post day 2, the left-arm revealed that team India consciously resorted to defensive tactics to mount pressure on the hosts.

“We talked that we needed to keep the pressure. The wicket was not such that you can go out and take quick wickets,” Jadeja said in the virtual post-day press conference.

“We wanted to bowl in the right areas and make them play dot balls, rather than try something each and every ball. So the plan was pretty simple: a bowl in good areas and not give them easy boundaries so that we can create pressure and get wickets.”

Jadeja accounted for the wickets of both Marnus Labuschagne and Matthew Wade, but one batsman who negated him rather comfortably was Steve Smith. The right-hander ended up amassing a near-perfect 131, and something which stood out in his knock was how he handled the spinners. Jadeja revealed that, rather than aiming for the glory ball, he was focused on hitting the right areas against Smith, who has been dismissed multiple times in the past by the left-armer.

Smith walked out with overflowing positive intent against the spin of Ravi Ashwin, and Labuschagne, too, followed suit. The duo used their feet effectively against the off-spinner and negated his threat comfortably, despite having been undone by him in the first two Tests. Jadeja warned that an overly positive approach might not always work, and said that he was keen to see how Ashwin comes back in the second innings.

“I think yeah against Ashwin they did play some shots. Sometimes it works, sometimes it doesn’t. It will be interesting to see how Ashwin comes back in the second innings.”

The Indian bowlers had a field day at the office, but so did young Shubman Gill, who followed up his impressive showing at the MCG with a maiden fifty. Gill proactively took on the Australian bowlers and raced to 50 in the third session, before being undone by a persistent Pat Cummins. Jadeja spoke highly of the youngster and labeled him ‘technically sound’.

“He (Gill) is technically sound. He has the temperament to play long innings. It’s good if he gives us a good start – today we got a 70-run opening partnership. It’s a good sign for us, particularly with him being a youngster. Hopefully, he comes good in the second innings as well.”