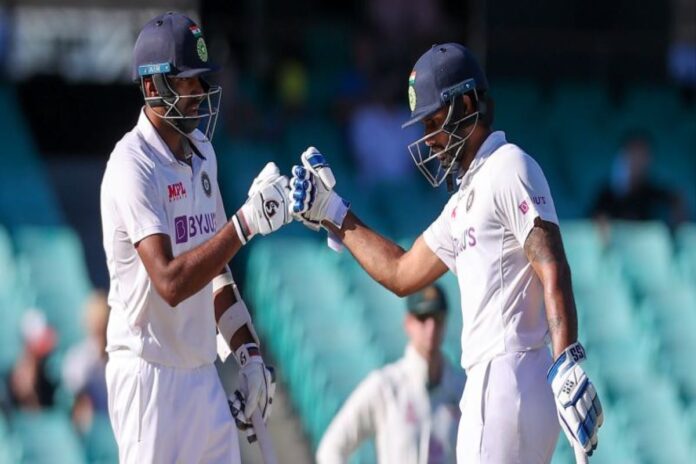 Indian skipper Ajinkya Rahane was delighted with the draw that India managed from a difficult situation, and lavished praise on Vihari and Ashwin for showing incredible character. The pair played a blockathon of 258 balls and copped blows on their body to salvage a historic draw for the visitors.

When India were given the task of chasing 407 runs at the SCG Test with possibility of 132 overs in the fourth innings, not many gave them a chance. Especially, after they were reduced to 102 for 3 with an out of form Vihari and bruised Pant to come and no surety about Jadeja. But Pant changed the whole outlook of the game when he made 97 off 118 to give India the hope of a win. But it didn’t last long as both Pujara and Pant got out quickly post lunch session with a win looking out of sight and a loss on the cards.

To add to the woes, Vihari injured his hamstring and Ashwin, a pale of shadow of himself in the last few years, had the arduous task of playing more than 40 overs. Ashwin and Vihari were peppered with bouncers, copped blows on the body, but they overcame all the odds and combined in a blockathon which lasted 258 balls to help India draw a classic Test as they faced 131 overs, the most by any Asian side in fourth innings of a drawn Test Down Under.

Ajinkya Rahane, the Indian skipper, went on to state how India were always intent on showing character and fight till the end, which they were able to translate on day five, when they turned all the stones thrown at them into milestones.

“Our talk coming this morning was to show character and fight till the end. Not to think about the result. Really happy with the way fought especially today but throughout the game, even in the first innings when Australia were 200 for 2 and getting them all out for 338 was really good,” a calm Rahane stated in the post-match presentation.

Rahane also praised Vihari, Ashwin and Pant for their heroic displays. Vihari made 23* off 161 deliveries while Ashwin battled 128 deliveries for his 39*. Pant was promoted up the order today and Rahane revealed the youngster was sent at #5 owing to the left-tight combination.

“There are few areas we can improve on but special mention to Vihari and Ashwin.