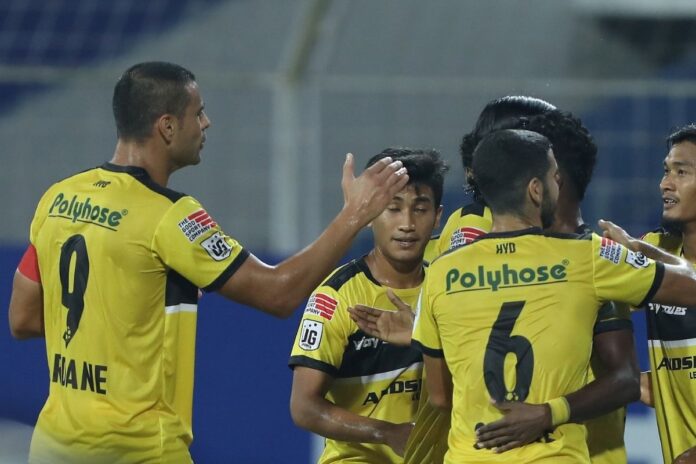 Hyderabad vs Odisha match ends all square as the Kalinga Warriors display an inspired performance in the second half to deny the Nizams all three points. Hyderabad would feel it should have taken advantage of its dominance by putting away the chances that came it’s way. Odisha responded well in the second half through Cole Alexander’s strike.

The Nizams had a golden opportunity to double their tally in the first-half but were denied by the woodwork. Colaco was involved in the move again, playing the ball to Aridane, who found Narzary on the left. The goal-scorer cut inside and fired a shot towards the bottom corner, which unfortunately came off the upright before being cleared out.

It didn’t take long for Odisha to draw level as they scored from a set-piece against the run of play soon after the break. Rakesh Pradhan found Diego Mauricio from a throw-in, and he played the ball towards Alexander. The Odisha captain struck on the volley from outside the box, as Kattimani stood still, watching the ball head into the bottom corner.

Hyderabad would see this as a missed two extra points in its bid to strengthen its position in the top four. They are in fourth place with 17 points while Odisha remains at the bottom with seven.