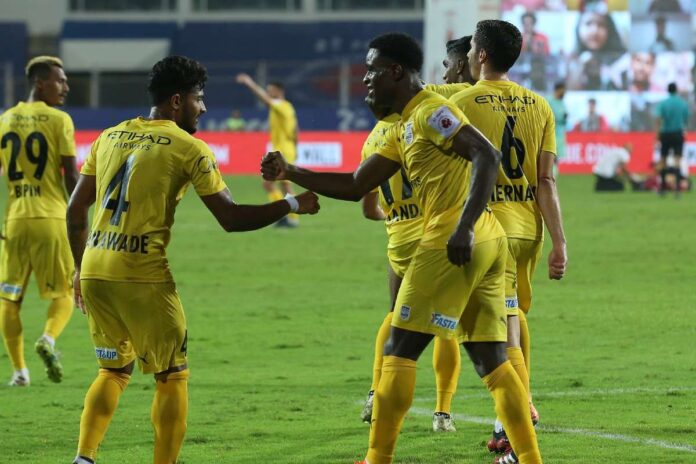 It ends as it started! Mumbai and Hyderabad play out a goalless draw in the Indian Super League at the GMC Athletic Stadium in Bambolim on Saturday.

Hyderabad was lucky at the start not to concede a penalty early in the game when Raynier Fernandes was fouled after an attempted clearance from Mohammed Yasir. The referee awarded an indirect free-kick inside the box, which Mumbai failed to capitalize on.

It was more of a nervous start for Mumbai in the second half. They gave the ball away easily and nearly conceded a goal, when Amrinder, in a bid to clear a back pass, played it straight to Colaco. However, the Hyderabad striker shot wide.

Colaco continued to trouble Mumbai with his pace and shooting range, but it wasn’t enough to get the goal they were looking for. Meanwhile, for Mumbai, they were not at their best in the second session. Lobera’s men were sloppy going forward and wasted too many chances in the final third.

Mumbai had two late opportunities to get the winner. Ahmed Jahouh lobbed the ball in the box for Bartholomew Ogbeche, whose first-time shot landed on the roof. Later, the Moroccan’s stoppage-time free-kick couldn’t get the desired connection from his teammate, as it was easily collected by Kattimani.

The Nizams managed its first clean sheet in nine outings, and in the process stopped Mumbai’s run of having scored a goal in its last nine matches. The point extended Mumbai’s lead at the top to six, with second-placed ATK Mohun Bagan playing again on Sunday.

In a match where both teams failed to convert many chances, it was Hyderabad who turned up stronger on the day denying any goal to the relentless Mumbai attack.