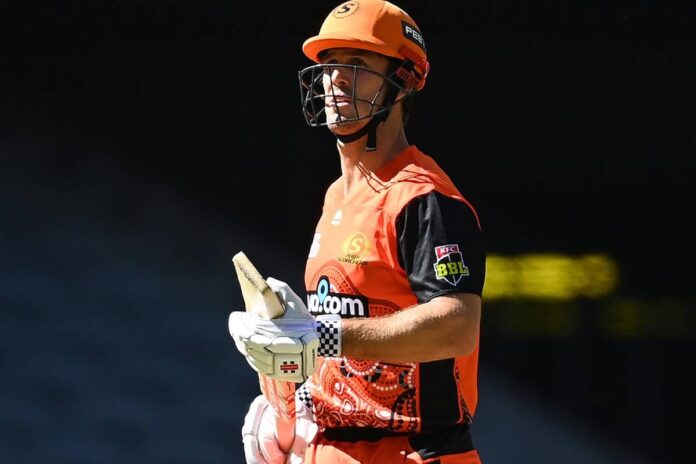 Mitchell Marsh could deem himself lucky after taking a long go at the umpire following a poor decision, with Cricket Australia fining the all-rounder for dissent and not banning him. The all-rounder now would be eligible to play for the Scorchers in the Challenger Final on Thursday.

The umpiring standards in the Big Bash League have hit an all-time low in the 2021 season of the competition, with terrible decisions all coming every other game. On Saturday, Mitchell Marsh was a victim of yet another bad decision when the all-rounder was deemed out caught down the leg-side off the bowling of Steve O’Keefe. However, the replays suggested a starking image, as the all-rounder hadn’t put a piece of the wood against the ball, prompting a reaction from Marsh.

Mitchell Marsh was seen unhappy with the decision as the visuals showed his dissent at the umpire Sam Nogajski’s decision. The all-rounder was charged by match referee Bob Stratford under Cricket Australia’s Code of Conduct for showing dissent at an umpire’s decision. Further, he accepted a level-2 charge and a $5000 fine but escaped a match-ban, which means he is eligible for the Thursday encounter.

“I accept the fine handed down to me, my reaction to the umpire’s decision was unacceptable and not the example I want to be setting for any young cricketer,” Marsh said in a statement.

“I have complete respect for the umpires and the job they do. I’ll learn from this and look forward to Thursday night’s match.”

Earlier in the same edition of the tournament, leg-spinner Adam Zampa was found guilty of a level-1 breach, which ensured that he missed one game for the Melbourne Stars. The Scorchers now await the result of the clash between Sydney Thunder and the Brisbane Heat for their encounter to play in the final against Sydney Sixers.