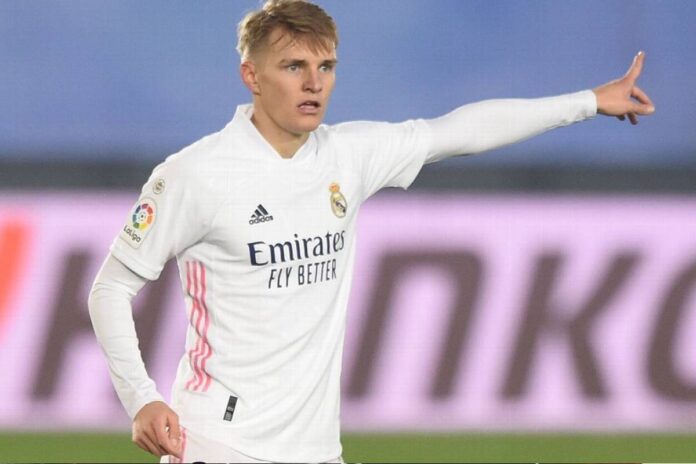 After weeks of speculation, Arsenal have confirmed that they have signed Real Madrid’s Martin Odegaard on a six-month loan spell with no option to make the move permanent. The 22-year-old struggled for minutes with the Los Blancos in the first half of the season and asked to leave the club.

With Mesut Ozil leaving the club after coming to an agreement to terminate the remaining six months of his contract, many fans hoped that Arsenal would make new additions. That combined with Martin Odegaard’s lack of game-time saw an opportunity open up for both parties. The 22-year-old had played just 367 minutes for Real Madrid in the first half of the season and that includes only seven appearances in the league.

It saw the Norwegian ask to leave the Santiago Bernabeu in order to get more game-time with many expecting Odegaard to re-sign for Real Sociedad on loan. The 22-year-old spent a successful 2019/20 season with the La Real before Real Madrid re-called him. But reports indicated that Arsenal intervened and swooped in before Real Sociedad could do anything, and the club have now confirmed the loan move. The club also released a statement over the same confirming that it is a loan move for the remainder of the season.

“Norwegian international Martin Odegaard is joining us from Real Madrid on loan for the remainder of the season. The attacking midfielder started his career in Norway with Stromsgodset, where he made his debut as a 15-year-old in April 2014, becoming the youngest-ever player to feature in the top division. After featuring regularly in the Stromsgodset team in his first season, Odegaard was signed by Real Madrid in January 2015 and subsequently became their youngest player in May 2015,” reads Arsenal’s statement on their website.

The 22-year-old signed for Real Madrid as a 16-year-old and went onto become their youngest player but has struggled for game-time since with multiple loan spells away. This spell at Arsenal will become Odegaard’s fourth club away on loan and the Norwegian admitted that to play in the Premier League has always been a dream for him. The attacker further added that this is a dream come true and he hopes that he can emulate former Arsenal star Cesc Fabregas at the club.

“In Norway, the Premier League is really big. Since I was a little kid there, we always watched all the games, me and my friends.  I think it’s the biggest league, especially in Norway, so for me it’s always been a dream to play in the Premier League and I always liked the way Arsenal played and everything about the club. So it’s a dream come true in many ways,” Odegaard told Arsenal.com

“There were a lot [of Arsenal players I admired]. But I think Fabregas, for me, was one of my idols when I grew up. So especially him. The way he controls the game, the way he dictated the game, his ability to give assists and also score goals. Everything about his game. I tried to learn as much as possible when I grew up watching him. He was the top player.”