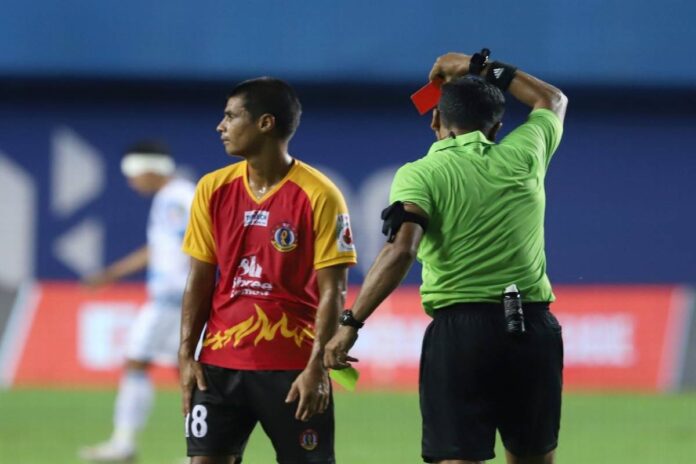 SC East Bengal get their first points of the season, as they hold Jamshedpur FC to a 0-0 draw, with both teams finishing with 10 men each.

Jamshedpur started well and looked hungry for an early lead. Aniket Jadhav should have scored in the sixth minute when he found himself in a one-on-one situation inside the box but he blasted the ball over the crossbar.

East Bengal received a major blow in the 25th minute when Eugeneson Lyngdoh was sent off for a high-footed challenge on Alex Lima.

Jamshedpur made a confident start, with attackers Alex de Lima, William Lalnunfela and Aniket Jadhav all finding spaces out wide and putting in decent crosses for the in-form Nerijus Valskis. Valskis tested the keeper with a superb volley in the first half, while Eze hit the bar from a header during a corner.

SCEB were largely outplayed in the centre of the park by Aitor Monroy and de Lima. Eugeneson looked particularly rusty, and a challenge from behind earned him a booking early on. It got worse for him just four minutes later when another mistimed challenge resulted in a second yellow and subsequent sending off.

Jamshedpur completely dominated proceedings in the second half as they created multiple goal scoring opportunities but credit to the East Bengal backline who stood firm on their ground nullified every single Jamshedpur attack.

n the end, the last-ditch defending combined with some clever hold-up play by Jacques Maghoma and Pilkington was enough to get East Bengal their first point following a nightmare start that saw them lose three in three.