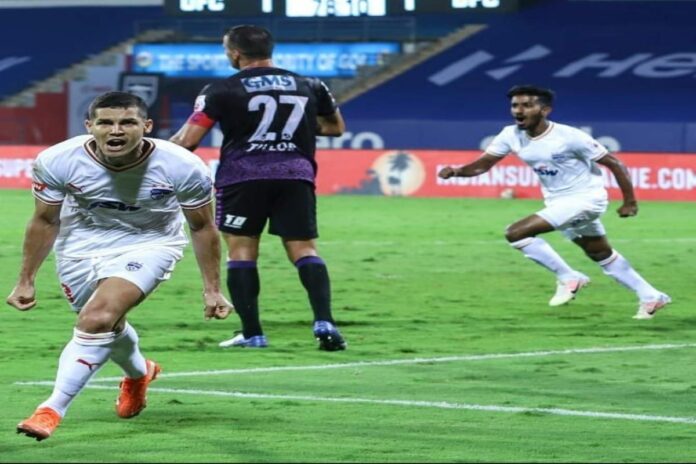 Goals from Chhetri and Silva give Bengaluru FC a 2-1 win over Odisha FC at the GMC Athletic Stadium in Bambolim.

There was little to separate the sides in a cagey first half, as the game failed to pick up a pace and saw more fouls than goalscoring opportunities.

Odisha had their moments in the game with Onwu and Jerry Mawihmingthanga creating problems for the Bengaluru defense but failed to test their keeper. They failed to record a single shot on target in the first session.

Bengaluru dominated with 58 percent possession in the first half but despite playing an attacking game, they struggled to get the ball past the Odisha defence line.

Chhetri gave Bengaluru the breakthrough minutes before half time with a superb leap to head the ball home from Harmanjot Khabra’s cross. Chhetri made his 50th goal contribution in the ISL with his header.

Odisha pushed hard for an equaliser in the 2nd half, creating several opportunities. They got their reward from a set-piece in the 71st minute, when Taylor timed his run perfectly to beat the offside trap to slot the ball home from Jerry Mawihmingthanga’s free-kick.

With scores tied 1-1, a long pass was headed into the path of Deshorn Brown by fellow BFC substitute, Udanta Singh. Brown then teed up Cleiton and the forward sealed the winner for the Blues in the 79th minute.

Odisha FC’s winless streak continues as the Blues overcome them in a three-goal thriller. BFC moves third after that win, while Odisha remains 10th after its fifth defeat.