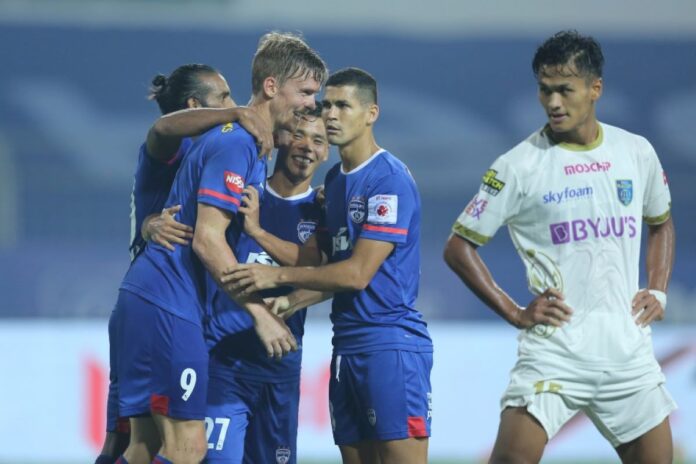 Bengaluru FC turned up the style and stretched their dominance over Kerala Blasters, beating their rivals from the South 4-2 at the Fatorda Stadium, in Goa, on Sunday.

Bengaluru started sharper than their previous displays with Sunil Chhetri and Kristian Opseth showing confidence and flair every time they got on the ball. But it was Kerala, who had the first shot on target. Facundo Pereyra, with great vision, spotted Jordan Murray with a through ball, slicing open the Blues defence. Murray took a touch and shot at goal but Bengaluru’s Gurpreet Singh Sandhu produced a diving save to deny Kerala the lead.

The teams were tied 1-1 at the break with Rahul KP (17’) giving Kerala Blasters a surprise lead which was canceled out by Cleiton Silva (29’).

The Blues then switched gears soon after the restart and scored twice in three minutes through Erik Paartalu and Dimas Delgado. The topsy-turvy clash saw Kerala come right back into the contest when Jordan Murray scored to make it 3-2. But skipper Sunil Chhetri, who saw a penalty saved, rose to head home a peach of a finish to put the game beyond debate.

The home side restored their two-goal lead and this time, it was Chhetri who got his name on the score sheet. The India international made amends for his earlier penalty miss and headed in a Harmanjot Khabra cross.

The result sees Bengaluru move to the fourth spot on the ISL points table, while Kerala Blasters remains ninth.